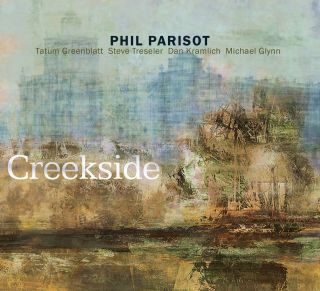 Catalog number: OA2 22148
Releasedate: 12-01-18
- All compositions by Phil Parisot
- Parisot is in his realm here, unleashing a torrent of fills and cymbal accents throughout...The level of pure, seething virtuosity is stunning. JAZZIZ MAGAZINE
His second recording as a leader, Seattle drummer/composer Phil Parisot's "Creekside" is a reflection on how nature manifests itself within urban environments.Within cityscapes, the natural world can be perceived as the primordial soup of origin, an invigorating point of departure, or an enveloping sanctuary. These perspectives are explored and embellished upon by Parisot's group as they tread through waters both timeless and visionary. Besides his usual working quartet with Steve Treseler on tenor saxophone, Dan Kramlich on piano, and Michael Glynn on acoustic bass, "Creekside" features New York trumpeter, Tatum Greenblatt. "...an imaginative composer and an extraordinarily musical soloist." - Paul de Barros, The Seattle Times.
For 15 years, Phil Parisot has served as one of the Pacific Northwest's leading drummers. He has extensive experience in contemporary musical settings, balanced with an understanding of various 20th century musical traditions. Lingo, his recent recording as a leader, draws upon an array of influences, including funk, Afro-Cuban, rock, and symphonic, all molded seamlessly into a cohesive modern jazz package.