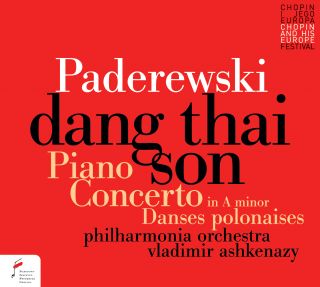 The compositional output of Ignacy Jan Paderewski (1860–1941), although highly regarded during his lifetime, was eclipsed from the start by his unprecedented pianistic success. Abandoned relatively early—Paderewski completed his last weighty work, the ‘Polonia’ Symphony, in 1907—with time it became even more overshadowed by his political activities, Paderewski ultimately emerging as one of the principal architects of Poland’s regaining of independence, in 1918. It would appear that only now, from our present-day perspective, when his pianistic and political achievements have passed into glorious history, has the turn come to appreciate Paderewski as the composer of what are often extremely valuable works.

One of the pre-eminent musicians of our times. He shot to fame by winning the International Fryderyk Chopin Piano Competition in Warsaw in 1980. He began learning piano with his mother in Hanoi. Spotted by the Russian pianist Isaak Katz, he continued his studies at the Moscow Conservatory with Vladimir Natanson and Dmitry Bashkirov.

He has performed around the world, at such venues as the Lincoln Center in New York, Barbican Centre in London, Salle Pleyel in Paris, Concertgebouw in Amsterdam and Suntory Hall in Tokyo, working with the finest orchestras, including the Philharmonia, BBC Philharmonic, Orchestre de Paris, NHK Symphony of Tokyo, the philharmonic orchestras of St Petersburg, Moscow, Dresden, Warsaw and the Czech Republic and the New Japan Philharmonic, as well as renowned chamber ensembles, under the baton of such outstanding conductors as Neville Marriner, Vladimir Ashkenazy, Pinchas Zukerman, Mariss Jansons, Paavo Järvi, Iván Fischer, Frans Brüggen and Vladimir Spivakov. He has taken part in such prestigious events as a New York Concert with Yo Yo Ma, Seiji Ozawa, Kathleen Battle and Mstislav Rostropovich (an NHK international television production, 1995) and the last festival of Isaak Stern (Miyazaki, Japan, 2001), and also a number of particular significant concerts in Poland, including the inaugural gala of Chopin Year 1999 and the gala concert on the bicentenary of Chopin’s birth, 1 March 2010.

He has performed in concert many times during the Chopin Institute’s festival ‘Chopin and his Europe’; the Institute has also released three internationally acclaimed discs by Dang Thai Son: with recitals on modern and period instruments (Diapason d’Or), and with Chopin’s two piano concertos, with the Orchestra of the Eighteenth Century and Frans Brüggen (platinum disc). Dang Thai Son is often invited to give masterclasses and has also sat on the jury of international piano competitions, including the Chopin in Warsaw (2005, 2010, 2015), the Clara Haskil in Switzerland and the Arthur Rubinstein in Tel Aviv. Since 2001, he has been a Guest Professor at Montreal University. He is also an honorary doctor of Bydgoszcz Academy of Music in Poland. He has recorded for Deutsche Grammophon, Polskie Nagrania, Melody, Analekta, CBS Sony and Victor JVC, and 2017 saw the release of a disc with works by Schubert (Victor JVC). Dang Thai Son has appeared on television,including NHK’s Tomorrow, when he met victims of the earthquake and tsunami in Fukushima in 2011: young musicians whom he motivated to continue their studies. His biography was published in 2003 under the title A Pianist Loved by Chopin: The Dang Thai Son Story. In 2016, he received the prestigious Prix Opus (a Canadian ‘Grammy’) in the category ‘Concert of the Year’.