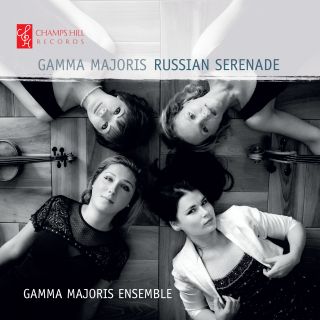 The debut release by this ensemble presents music by Tchaikovsky and Rachmaninov in arrangements by the ensemble. “The idea of arranging Russian songs emerged spontaneously from a rehearsal one day. What would happen if we added lyrical string instruments to complement the soaring melodies and polyphonic and complex accompaniments of songs by the great Russian composers? To our delight, it worked beautifully.”

The songs cover a wide emotional range, from dark and dramatic, to tender and the overall concept chimes with the idea of late-nineteenth domestic music-making, with the Tchaikovsky settings of texts by Russian poets including Pushkin, Tolstoy, and Rachmaninov also using translations of Shelley and Hugo.

Gamma Majoris is a London-based ensemble whose concert programmes showcase the individual and combined talents of four established soloists to present classical music in a new way.

The ensemble’s name derives from the star Gamma Ursae Majoris and is also the term for ‘major scale’ in Russian (гамма – scale, мажор – major).