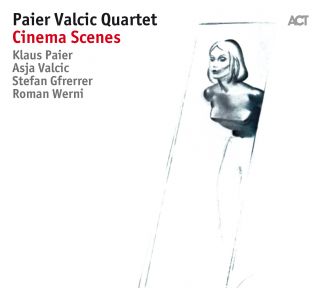 Paier and Valcic’s music is always sensual and rich in images, and this opulence of colours and pictures is also at the heart of what “Cinema Scenes” is about: they let their impressions of films flow freely as music, but above all the two musicians give expression to their own visual ideas.

Asja Valcic, at 18 completed the music academy in her home city of Zagreb. She followed that with studies at the Tchaikovsky Conservatory in Moscow and at the Hochschule für Musik in Detmold. She has given solo performances among others under the direction of  Zubin Mehta and Kazushi Ono; her chamber music partners have included members of distinguished ensembles such as Alban Berg, Brodsky and the Melos Quartet. She was awarded the "Concours international de jeunes concertistes de Douai“ in France in 1995. The cello leads a sonorous, if not largely inconspicuous, existence outside of the classical  music world. Emerging from this background, the cellist, Asja Valcic has solidified a conspicuous place for herself in the European music scene. Parallel to her engagements and  recordings in classical subjects, Asja Valcic has increasingly turned to improvisation and new forms of expression for her instrument. Both the radio.string.quartet.vienna, which she cofounded  in 2004, as well as duos with the Austrian accordionist and composer, Klaus Paier (2009) represent stylistic crossovers, which enjoy international recognition. Since 2012 she
is also a member of Iiro Rantala String Trio. The native of Croatia works as an arranger, composer and lecturer. "As a musician, who grew up in chamber music, Asja Valcic imbues her jazz with powerful and unusual vitality," according to a review in the British GUARDIAN. "Valcic's cello emits
everything that fingers and bows can entice from strings: everything from stunning bass pizzicati to whispering flageolets," writes the BADISCHE ZEITUNG. "She is a cunningly smooth instrumentalist," emphasizes the culture magazine, MIKADO (Hessischer Rundfunk). Since 2007 have been released 10 CD’s with Asja Valcic at ACT.

Paier studied accordion, jazz and composition at Klagenfurt conservatory. Paier has been particularly inspired by such instrumentalists as Keith Jarrett, Bill Evans, Charles Mingus or Thelonious Monk. For him, their conception of jazz, with its wide diversity of musical possibilities and freedoms, was of inestimable importance. In addition to the historically evolved European harmonies involving the accordion, the classical component has also assumed an unmistakable position in Paier's compositions. He himself aims to express a positively charged polarity in music: attraction and rejection, weight and lightness, loudness and quietness, openness and self-containment, strict discipline and passionate explosiveness. He accomplishes this feat again and again in an inimitable manner, enthralling his audience in concert tours in Israel, France, Italy, Sweden, Poland and many other European countries. Be it as a soloist, with his duo partner Gerald Preinfalk, in the trio with Stefan Gfrerrer and Roman Werni, or the radio.string.quartet.vienna – Klaus Paier ranks among the great European accordionists with a world-wide reputation.