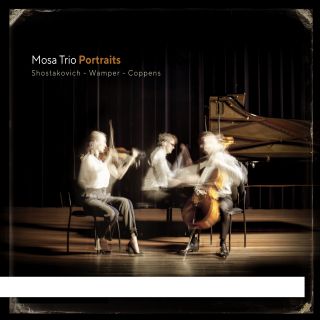 Catalog number: AR 006
Releasedate: 09-02-18
- First album of Mosa Trio
- Contemporary compositions; three piano trios in which music and image form an indivisible whole.
If sound is color, and time is space, composers and musicians can be painters. On its electrifying debut CD Portraits, the Belgian-Dutch Mosa Trio interprets three pictures: Shostakovitch's desolately intense tombeau for a friend (the Piano Trio No. 2 of 1944), Sam Wamper's scintilating portrait of his beloved (2015), and Mathias Coppens' versatile celebration of listeners and performers (2015). Whether painting or playing, the Mosa Trio pays a generous homage to the coloristic and expressive power of the modern piano trio.

Thanks to their characteristic way of playing, “it’s always a great pleasure for the audience to attend one of their concerts” (Vincent Coq, Trio Wanderer). The trio likes to challenge their audience by programming different, contrasting styles in one concert, so that the audience not only hears music they know and love, but also discovers new or unknown music. These exciting choices in programming make a concert by the Mosa Trio a unique experience. Or, as Festival Classique wrote in 2013: “Whether the music sounds playful or musing, the Mosa Trio pulls the audience into the music, until we can almost feel the notes. The Mosa Trio excels in creating a story for the audience.” The personal way in which the trio talks about the musical works, also contributes to creating this story. Especially when performing contemporary pieces, this brings beautiful and often new insights to the audience.

The international career of the Mosa Trio took off after winning numerous prizes. Among others, they won the second prize at the 31st FNAPEC Concours européen Musique d’Ensemble (2017, FR), the second prize and honorary prize for the most beautiful performance of the obligatory contemporary piece at the International Orlando Competition (2015, NL), the ‘Supernova – the Future Sound of Classical Music’ in Brussels (2014, BE), the third prize, the audience award and the young jury award at the Concours International de Musique de Chambre d’Illzach (2013, FR) and the jury and audience award at the Storioni Ensemble Competition (2012, NL).

Since it’s foundation in 2010, the Mosa Trio has played in many of the big venues in the Netherlands and Belgium, such as the Concertgebouw Amsterdam, Muziekgebouw Eindhoven, Theather aan het Vrijthof (Maastricht), BOZAR (Brussels) and the Academiezaal (Sint-Truiden). It has also played at numerous festivals, such as the Grachtenfestival (Amsterdam), Festival Classique (The Hague), the Orlando Festival (Kerkrade) and the Klara Festival (Brussels). Apart from these concerts, the Mosa Trio performed around the globe in amongst others the Opera Museum Verona (Italy), the Sichuan Conservatory of Music (China) and at the Festival de Musique d’Illzach (France).

The Mosa Trio has featured in dozens of live radio and television broadcastings, including a concert recording for the program ‘Generatie K’ on Canvas (VRT) and recordings for Klara during the Klarafestival and for Radio 4 in the Concertgebouw Amsterdam.

Not only do the members of the Mosa Trio share their passion for classical music on stage, they also regularly teach in masterclasses and workshops at e.g. the Sichuan Conservatory of Music (China) and the Orlando Festival Ensemble Course.

The name of the Mosa Trio is derived from Mosa Trajectum, the Latin name of the city of Maastricht. The trio was coached at the Conservatory of Maastricht by Henk Guittart (Schönberg Quartet) and Tonie Ehlen. It took part in several masterclasses and lessons from musicians including Menaham Pressler (Beaux Arts Trio), Susan Tomes (Florestan Trio), Marc Steinberg (Brentano Quartet), Andreas Frölich (Mendelssohn Trio Berlin), and Marc Vossen (Storioni Trio). Currently, the trio is studying with Trio Wanderer at the Conservatoire à Rayonnement Régional de Paris in the Cycle Concertiste. Furthermore, it is an Aspirant Ensemble of the European Chamber Music Academy.