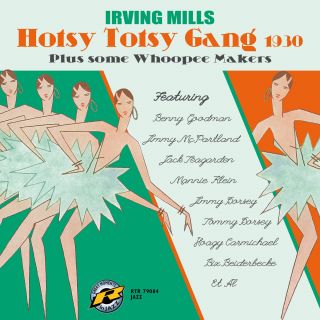 - Many of the recordings on this album by the Hotsy Totsy Gang are "so hot that the music would have to be written down on sheets of asbestos"!

Irving Mills was a jazz publisher who also went by the name of Joe Primrose, and, together with his brother Jack, was also owner of Mills Music. When the brothers sold Mills Music, the company had grown into the biggest independent music publisher worldwide. But Mills was not only a publisher, he also was a singer, lyricist, song writer, responsible for artists and repertoire and in addition also managed numerous bands, including Cab Calloway, Benny Carter, Fletcher Henderson, Mills Blue Rhythm Band as well as, between 1926 and 1939, the Duke Ellington Orchestra.

He sang, but was no musician, and yet Irving decided to put together his own band for studio recordings. Among Irving Mills and his Hotsy Totsy Gang were Tommy Dorsey, Jimmy Dorsey, Joe Venuti, Eddie Lang, Arnold Brillhardt, Arthur Schutt and Manny Klein.
The recordings of the Hotsy Totsy Gang that were made between 1929 and 1930 boast some of the best white jazz musicians of their time, often with spectacular results. Sometimes Mills sang on those recordings, other times he merely arranged recording dates and selected musicians.

Many recordings that can be heard on this album of the Hotsy Totsy Gang are “so hot that the music should be written down on sheets of asbestos”!

Mills was born in Odessa, Ukraine, although some biographies state that he was born in the Lower East Side of Manhattan in New York City. His father, Hyman Minsky (1868–1905), was a hat maker who had immigrated from Odessa to the United States with his wife Sofia (née Sophia Schifre; born 1869). His father, Hyman, died in 1905, forcing Irving and his brother, Jacob (aka "Jack"; 1891–1979), to work odd jobs including bussing at restaurants, selling wallpaper, and working in the garment industry. By 1910, Mills was listed as a telephone operator.  Mills married Beatrice ("Bessie") Wilensky (maiden; 1898–1976) in 1911 and they subsequently moved to Philadelphia. By 1918 Mills was working for publisher Leo Feist. His brother, Jack, was working as a manager for McCarthy and Fisher, the music publishing firm of lyricist Joseph McCarthy (1883–1943) and songwriter Fred Fisher (1875–1942).  Founding of Jack Mills Music In July 1919, Irving Mills and his brother, Jack, founded Jack Mills, Inc., which was renamed Mills Music Inc. in 1928.