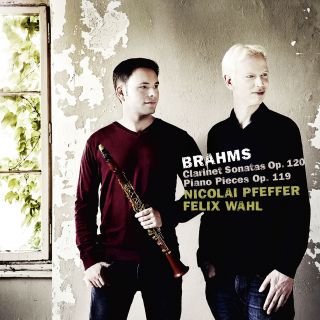 Catalog number: AVI 8553394
Releasedate: 09-02-18
- Young perfect clarinet player who is about to make a great career
- Rare combination of the two latest Brahms’ pieces Op. 119 & 120, composed within the same time
- Already a teacher at three major Universities of Music in Cologne, Bremen and Munich

An Unfailing Cosmos „With Opp. 119 und 120, this CD regroups the last solo piano work and the last chamber work composed by Brahms. These two genres played a major role in his output, and in these pieces one can easily hear that Brahms is drawing a finishing stroke. Their respective structures contrast as much as possible with one another – extended sonatas vs. short pieces –, thereby offering us a glimpse into the inexhaustible universe of a composer’s entire life. Placed between the two monumental sonatas, the piano intermezzos offer the listener a breather for introspection and contemplation.“ (The Artists)

Nicolai Pfeffer studied under the guidance of Bruce Edwards, Sharon Kam, and others before enrolling at the Cologne University of Music and Dance, with Ralph Manno. He continued his studies at Indiana University in Bloomington, where he completed postgraduate education with Howard Klug. He also attended various Masterclasses of Sabine Meyer, Karl Leister, Alan Hacker, Charles Neidich etc. Njicolai Pfeffer is the recipient of many prizes, scholarships, and grants.

He has given guest performances at major festivals throughout Europe, South America, the United States and the Middle East. He plays regularly with pianist Felix Wahl, with whom he has appeared in concert series such as SpitzenTöne, Mendelssohn Haus Leipzig, Beethovenhaus Bonn, and many
others. The same passion and expertise that drives his playing also inspires his musicological research and teaching activities mainly at the Cologne University of Music, The Bremen Hochschule für Music and the Music University in Hannover.

His appearances as soloist and chamber musician have led him to perform all over Germany and abroad. He has also chosen as répétiteur for a series of masterclasses. Felix Wahl has guested at a number of established festivals and concert series, including the Bonn Beethovenfest, Schleswig- Holstein-Musikfestival, the Ruhr European Classical Music Festival, the Bonn Schumannfest, “Spitzentöne” in Cologne, the Orfeo Festival in Kerkrade (NL), and has performed in outstanding venues such as the Bonn Beethovenhaus, the Bochum Jahrhunderthalle, the Mendelssohn House in Leipzig, the WDR Broadcast Auditorium (Sendesaal) in Cologne, and others.