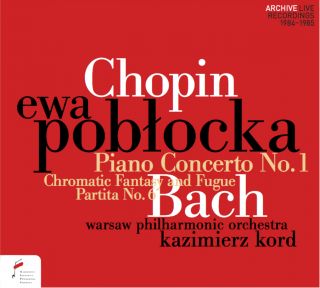 Piano Concerto No. 1 Chromatic Fantasy and Fugue Partita No.6

A sixtieth-birthday album from the world-renowned artist Ewa Pobłocka, a prize-winner of the 10th International Fryderyk Chopin Piano Competition in Warsaw and one of the most outstanding Polish pianists. This disc is a unique release in the series ‘Concerts frozen in time’, containing archive recordings of a performance with the Warsaw Philharmonic Orchestra and Kazimierz Kord (1984) and a Bach recital also given at the Warsaw Philharmonic (1985).

Could it be that a synonym for Polish ‘pianism’ is its narrower—yet treacherous—field known as ‘Chopinism’? A rhetorical question, which is best left unanswered. Yet there are artists who could hardly be imagined in isolation from the work of Fryderyk Chopin and who, although successfully exploring extensive areas of music, continually return to Chopin. I for one simply cannot imagine Ewa Pob∏ocka in isolation from Chopin. It is interesting to wonder when she first thought about Chopin. In the self-conducted interview on her website, she does not let on. In 1980, on the pages of G∏os Wybrze ̋a, she admitted: ‘the fact that I would play in the Chopin Competition was decided a very long time ago. Already in the first year at primary school
I decided that I would play in the Competition. I always remembered about that [...]’. Yet Chopin is just one of the many reference points in the constellation of the composers who form her world...

For Polish pianists, the Chopin Competition is both a blessing and a curse. After all, can they possibly exist without the music of Chopin? In October 1980, when competing in the 10th International Piano Competition, Ewa Pob∏ocka was faced with no easy task. A dual responsibility fell on her shoulders. First, she had won the so-called ‘little Chopin Competition’—the nationwide qualifying competition held to find the Polish ‘team’ to take part in the ‘real thing’. The realities of socialist People’s Poland made it impossible to compete on one’s own initiative. Secondly, as Stanis∏aw Dybowski put it, ‘Ewa Pob∏ocka worked hard for her prize, not succumbing to stress even when, from the third round onwards, burdened with a great responsibility, she alone was defending the honour of Polish Chopin interpretation. It takes great strength and determination not to yield to the weight of expectation from an audience demanding that you win.’ Ewa Pob∏ocka emerged victorious from that extraordinary competition (in 1980, the Chopin Competition was marked by a very high standard and the now legendary ‘row’ over Ivo Pogorelich).

She won Fifth Prize and also the prize that for a Polish artist is perhaps the most important: the Polish Radio Prize for the best performance of mazurkas (together with the winner of the competition, Dang Thai Son). After all, mazurkas are the hardest pieces to interpret, requiring particular sensibility and imagination of the pianist.