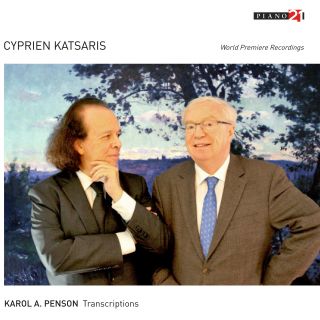 Transcriptions by Karol A. Penson

When Cyprien Katsaris came across Karol A. Penson's magnificent transcriptions he was immediately taken by the refinement that he brought to these reworkings for the piano. This recording features a number of the most celebrated composers such as Bach, Schubert and Brahms ... but also unknown masters like the Pole Karłowicz, the Russian Schaporin and the Paraguayan Mangoré. A genuine discovery thanks to a transcriber who is also a professor of theoretical physics at the University of Paris VI and winner of the Franco-German Alexander von Humboldt Prize.