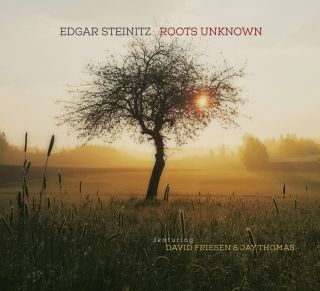 Catalog number: OA2 22149
Releasedate: 09-03-18
- A musical exploration of a 50/50 split - Askenazi and Sephardic heritage
- Special Guest artist: David Friessen and Jay Thomas
With an artistic hand lent by legendary bassist David Friesen, clarinetist Edgar Steinitz presents a soulful debut recording. Honoring his heritage, Steinitz taps into a deep spirituality inspired by the joyous melodies of traditional Ashkenazi and Sephardic Jewish musics, offering originals and improvisations in their spirit.  Besides Friesen on bass, Roots Unknown features an ensemble of accordian, violin, and percussion along with master improvisor, trumpeter and saxophonist Jay Thomas. Combining the refined musical tastes of the Northern European Ashkenazi, and the strong Afro-Latin influences from the Northern African and South American Sephardic communities, Steinitz discovers a rich and significant musical landscape to explore.
Edgar Steinitz grew up near the "Big Apple" saturated by arts and music. He frequented the Jazz scene in the 6-'s, and witnessed the likes of Dizzy Gillespie, Thelonious Monk and Buddy Rich. When not working as a physician (for decades Associate Professor, University of Washington Rehab) he gives up the reflex hammer for his horns. Some have nicknamed him the 'Dancin' Doc' because of his double-major in Chemistry and Dance-Theater. For the past 12 years, Edgar has studied with David Friesen, among others, and is honored to co-produce and release this work of passion, and dedication, entitled Roots Unknown honoring dual Ashkenazi and Sephardic heritages. He regularly performs with Jazz Connection and On the Rock.