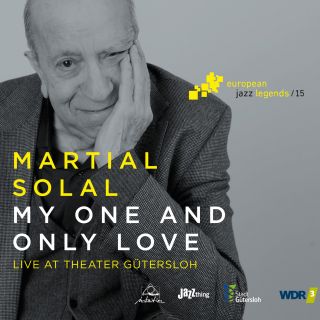 My One And Only Love - European Jazz Legends Vol. 15

"Martial Solal has, in abundance, those indispensables of the musicians’ craft: sensitivity, creativity, and a prodigious technique. Most of all, he sparkles with refreshment." These words of praise were written by his "soul brother" Duke Ellington for Solal’s US debut album, recorded mostly at Newport in 1963 with Bill Evans’ rhythm section Paul Motian on drums and Teddy Kotick on bass. More than half an exciting century later the legendary French pianist and composer, who excelled with works for soundtracks, orchestras, big bands and his own groups, as well as in the meantime duo settings with jazz masters from Lee Konitz to Dave Liebman, once again proved why the Duke loved him madly.

As soon as Martial Solal sat down at the piano in the Theater Gütersloh for soundcheck, all the months of preparation and practice for this solo-concert, and the strain of the travel here from his home in Chatou near Paris seemed to disappear. "At home I don’t even make music, I just practice scales and things", he said, after explaining why he looks forward to play on a great grand piano on stage. "I have two pianos at home: I practiced for years on an old upright piano with a light keyboard touch, and I was frequently suffering when meeting on stage instruments with a heavier touch. Then I bought in 1977 a grand piano Kawai, and asked the piano maker to adjust it with a heavy touch response, to be perfectly at ease on all kind of pianos I am invited to play. I always have the music in my head, but it only comes out on the right instrument."

Solal obviously enjoyed playing the Steinway on offer here, and almost forcibly had to restrain himself from letting out even more amazing music already at soundcheck. He was wondering which song even the kids attending the concert that evening would recognize, some tune so well known that he could weave it into his improvisations to get their attention. After several suggestions, this 90 year old European Jazz Legend was finally reminded of "Frère Jacques", a nursery rhyme Solal knows well, but had never played before – at least the way he did that night!
The two "Sir Jack" improvisations on the theme of this canon included in this live recording alone attest the pianist’s sensitivity, creativity, and prodigious technique. And yes, they, and all the other melodies you thought you knew so well, sparkle with refreshment, too.


Götz Bühler
Solal was the son of an opera singer and piano teacher, and learned the instrument from the age of six. After settling in Paris in 1950, he soon began working with leading musicians including Django Reinhardt and expatriates from the United States like Sidney Bechet and Don Byas. He formed a quartet (occasionally also leading a big band) in the late 1950s, although he had been recording as a leader since 1953. Solal then began composing film music, eventually providing over twenty scores. He is probably best known for the music he wrote for Jean-Luc Godard's debut feature film Breathless (À bout de souffle, 1960).  In 1963 he made a much admired appearance at the Newport Jazz Festival in Rhode Island; the Newport '63 album purporting to be a recording of this gig is actually a studio recreation. At this time, his regular trio featured bassist Guy Pedersen and drummer Daniel Humair. From 1968 he regularly performed and recorded with Lee Konitz in Europe and the United States of America. 1988  In recent years, Martial Solal has continued to perform and record with his trio. Throughout his career he has performed solo, and during 1993-94 he gave thirty solo concerts for French Radio, a selection of performances from which were subsequently released in a 2-CD set Improvise Pour Musique France by JMS Records.  Solal has also written a piano method book entitled Jazz Works.  In 1997 Solal performed with Lee Konitz, Dave Holland, and Jack DeJohnette in "Satori".  In its January 2011 issue, The Gruppen Review published a 12-page interview in which Solal discusses his work as an eternal "researcher in jazz".
Source: Wikipedia