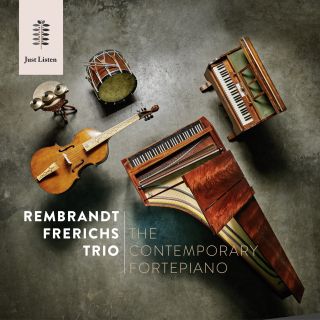 Catalog number: JIM 74709
Releasedate: 08-03-18
- The contemporary fortepiano, revival of a historical instrument
- Early, almost forgotten instruments like the fortepiano and the harmonium, are dusted off and made to shine anew
- Takes the listener on a world tour comprising 15 musical miniatures that each highlight a different aspect of the ensemble

Hip music on historic instruments Did you ever hear an 18th century fortepiano, a violone from 1560 and a historical drum and percussion kit playing contemporary music full of improvisation and groove? On the latest release of the Rembrandt Frerichs trio this unlikely combination has come together. And how! This mix of sounds has never before been heard, certainly not in jazz. The chosen repertoire is equally unorthodox: the trio play original compositions, baroque repertoire, modern improvisations and even Herbie Hancock's jazz-rock hit “Butterfly”.

Piano-pioneer Rembrandt Frerichs developed a unique playing style on the fortepiano, an idea that was spawned by the many collaborations with musicians from the Middle East. The National Musical Instrument fund had such an instrument built for Rembrandt by Chris Maene in Belgium. In response to this, Tony Overwater started to master the violone, precursor to the double bass. Vinsent Planjer complements this with an unconventional collection of percussion instruments from all over the world, the Whisper Kit.

The Rembrandt Frerichs Trio demonstrates that instruments from centuries gone by can sound totally modern when placed into a new context. The listener experiences a sound palette like they have never heard before but that’s strangely familiar.

REMBRANDT FRERICHS is a Dutch pianist and composer. As a student, he received a scholarship from the Excelling Young Musicians Fund, to study at the New York Conservatory. He graduated with honors from the jazz department of the Royal Conservatory in The Hague. | INFLUENCES He debuted at the North Sea Jazz Festival aged 22, and worked with saxophonist Michael Brecker, who said about him, “This guy sounds great!” Rembrandt plays in various of his own ensembles, such as the Rembrandt Frerichs Trio and Levantasy. His sound is characterized by influences of Arabic music and baroque music, which stand next to the American jazz tradition. His special style and use of instruments has not remained unnoticed: in 2016 the Foundation of the Performing Arts had a fortepiano made specially for Frerichs, which he currently uses for various projects. MUSICIAN, TEACHER & ARTISTIC LEADER Frerichs teaches jazz piano as a main subject at the Tilburg Conservatory, and works as a guest lecturer at the conservatories of Amsterdam, Rotterdam and Utrecht. He is also artistic leader of several cultural fora, such as the Rabo Jazz Festival (Oud-Beijerland), the Waterfront Jazz Club (Almere) and the Regentenkamer (The Hague). | RECOMMENDATIONS His debut CD Self Portrait (2007) was nominated for an Edison Award and was ‘Album of the Week’ on London Jazz Radio. In 2010, Rembrandt Frerichs played in the legendary jazz club Birdland in New York, together with, amongst others, trumpet player Michael Varekamp. That same year, the NRC Handelsblad wrote about him: “Rembrandt makes the story of jazz a richer one”.

TONY OVERWATER is one of the most notable Dutch bass players. He is a versatile musician, composer, soloist, band leader and supervisor in the Netherlands and far beyond. He graduated with honors from the Royal Conservatory in The Hague. He won the VPRO / Boy Edgar Prize, the Podium Prize, and an Edison. He worked with extraordinary musicians, including Karin Hammar, Yuri Honing, Pat Metheny, David Murray, Paolo Fresu, Eric Vloeimans and many others. Overwater is also known as an expert organizer. During his time at the conservatory, he founded the Jazz in Motion Foundation and the accompanying record label. | DIFFERENT FORMATIONS Overwater shares his passion for jazz, Arabic music and baroque music with the other members of the Rembrandt Frerichs Trio. With this trio, he began playing the violone; a 6-string bass instrument from the Baroque era, predecessor of the double bass. Overwater has been playing with the trio Jungle Boldie for over twenty years, with Maarten Ornstein on reeds and drummer Wim Kegel. This close formation formed the basis for a number of original projects, such as Far East Revisited with the Calefax Reed Quintet and the CD ‘OP’ with Ack van Rooyen and Ernst Reijseger, which received an Edison. Inspired by working with Lebanese singer Rima Khcheich, Tony Overwater developed a new style of playing on the double bass, incorporating the techniques and scales of Arabic music into a unique style. Working with various other bands and musicians, they form a much sought after attraction at festivals in the Middle East and Europe. Music for children has always had a special place in the heart of Overwater. He sees it as his mission to bring jazz and acoustic music of quality to the attention of kids. After the project Kikker Swingt! (Frog Swings!) with Max Velthuijs, he developed various other music shows together with singer-songwriter Lotte van Dijck. | PROJECT ORGANIZATION AND DOCUMENTARY MUSIC Being an architect’s son, Tony Overwater has a fascination for the visual aspects of music. In addition to writing music for various films, documentaries and dance shows, he and Joshua Samson initiated the ‘Guarder of the Key’ Project. A location-based concert, taking place on a set day of the month. Each time the performance is held at a different, secret, location and always with a different guest. The interaction between architecture, environment, music, musicians and the audience makes this special small-scale project a unique experience. Overwater recorded the music for the documentary Om de Oude Wereldzee about Abraham Kuyper, combining his expertise and affinity with Arabic music and classical European music.

Jazz drummer VINSENT PLANJER graduated from the Royal Conservatory in 2001. His final exam stood out because it only consisted of his own compositions. Since then, he has turned into a highly sought after accompanist of jazz soloists at the Dutch music venues and festivals. He is also increasingly involved in producing, developing and organizing artistic endeavours. He plays an important role in the concert series of The Hague Ethospheric Orchestra, which has been performing with the absolute top of the national jazz for the last couple of seasons. | BROADENING HIS PLAYING FIELD As a member of the Rembrandt Frerichs Trio, Planjer has developed into a leading exponent on his instrument, to be seen at many music venues in the Netherlands and far beyond. His sound is appreciated for its sophistication and at times melodic approach. As a co-project owner of The Contemporary Fortepiano, in which members of the Rembrandt Frerichs Trio use historical instruments, he paves the way for broadening his playing field. Planjer plays the self-designed and built whisperkit. With this line-up, Planjer is increasingly seen at classical music venues and festivals.