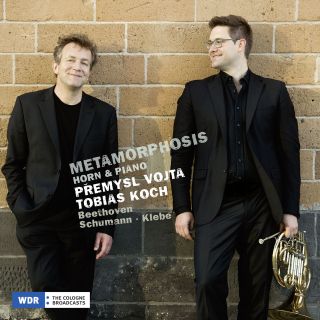 Catalog number: AVI 8553383
Releasedate: 09-03-18
- That record shows a kind of development of the horn instrument as well as the technique of playing by reference of pieces from Beethoven, Schumann And Giselher Klebe
- Přemysl Vojta is a young horn player from the Czech republic who works as a freelance as well as the horn principle of the WDR  Radio Symphony orchestra (Cologne).
- Tobias Koch is a keyboard specialist working mainly with instruments before 1900.

Alteration and transformation, influence and interaction! The horn and the piano have gone through immense changes over the course of time, as this recording with works by Beethoven, Schumann and Klebe intends to illustrate. The natural horn, the Romantic valve horn and the modern horn enter in dialogue with the fortepiano, the Romantic piano and the modern grand. We embarked on an adventurous musical expedition in the recording studio by dealing with three different types of horns and three different keyboard instruments in the course of three days, thereby attempting to span a wide musical range that depicts the transformation of the historical timbre ideal, condensed as in a time lapse.

Yet we never regarded this project as a purely instrumental challenge. Our intention, instead, is to show how the language of musical composition itself has undergone profound change on the basis of certain instrumental modifications. The distance covered is immense: from Beethoven’s Horn Sonata, still entirely immersed in the style of the late 18th century, passing through Robert Schumann’s Romantic attitude and leading to Giselher Klebe’s Alteration of Beethoven’s so-called Moonlight Sonata, thereby creating a technically challenging work with perspectives that mirror a multitude of tendencies. It is no coincidence that our programme, in so doing, returns to Beethoven, albeit experienced in a very different way: in Klebe’s work, innovative, revolutionary elements of composition and instrumental technique are directly noticeable.

Each of these works possesses its own style. Instead of striving to ‘homogenize” the timbre, we attempted to find individual musical identities, which can be easily perceived thanks to the variety of instruments used on this recording. We invite you to enter this musical time machine, which will take you on a journey through two centuries.

Born in 1983 in Brno (Czech Republic), Pˇremysl Vojta was a laureate of the international wind instrument competition in his home town, as well as in Bratislava and in Vidnava. In 2010 he won Frist Prize in the specialty of French Horn at the ARD International Music Competition in Munich. He also received the Audience Prize and the prize for the best performance of a new work, along with a special award from the New Philharmonie Westfalen. In 2011, after his successful debut at the Beethoven Festival Bonn, he received the prestigious Beethoven Ring Award. Vojta was an academist of the Staatskapelle Dresden in 2008; he went on to hold the position of Principal Horn with the Staatskapelle Berlin and with Berlin Konzerthaus Orchestra. Since December 2015 he has been Principal Hornist of WDR Symphony Orchestra Cologne. After having served as a member of the faculty at Berlin University of the Arts from 2010 to 2015, he now teaches French horn at the Hochschule für Musik und Tanz in Cologne. Pˇremysl Vojta began playing the horn at the age of ten, under the mentorship of Olga Voldanová. After studying at the Prague Conservatory from 1998 to 2004 with Bedˇrich Tylšar, he moved to Germany, where he was a student of Christian-Friedrich Dallmann from 2004 to 2010. During his studies he was supported by grants from the Villa Musica Foundation (Mainz) and the Paul Hindemith Society (Berlin). As a soloist, he has performed with orchestras such as BR Symphonieorchester Munich, Stuttgart RSO, Berlin Konzerthaus Orchestra, Wiesbaden State Theater Orchestra, Camerata Salzburg, Academy of St. Martin in the Fields, Vienna Chamber Orchestra, and Prague Philharmonia. He has performed in recitals and solo concerts at prestigious European festivals including the Bonn Beethoven Festival, the Prague Spring, the “Mitte Europa” Music Festival and the Mount Olympus Festival in Saint Petersburg. Pˇremysl Vojta has recorded the Brahms Horn Trio for Supraphon. On the same label he made his solo recording debut in 2013 with the CD “French Horn in Prague”, featuring Czech modernist works.