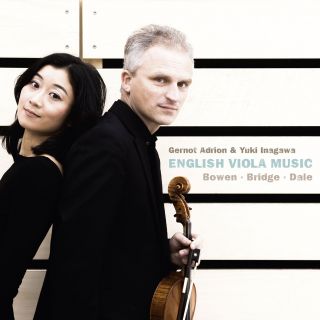 Catalog number: AVI 8553173
Releasedate: 09-03-18
- A selection of highly important Viola music pieces from a very productive period in English Music History
- First time that compilation of the three composers is on record
- This music is a discovery for all chamber music friends, rarely recorded

Even frequent concertgoers will find it difficult to imagine what to expect under the heading “English viola music”. A few symphonic works by Elgar, Vaughan Williams and Britten have found an established place in our German concert repertoire; violists also know William Walton’s concerto. Other composers of the British Isles, however, have remained unknown to the German public in spite of their prolific output: names such as York Bowen (1884-1961), Benjamin Dale (1885-1943) or Frank Bridge (1879-1941). These three, featured on this CD, belong to a generation of musicians who centered their activities around London toward the turn of the century and ushered in a new period blending Late Romanticism with Classical Modernism.

All three of them had a particular penchant for the viola’s dark and melancholy timbre: the viola could serve as the perfect musical correlate to the fin-de-siècle mood that had taken over the minds and hearts of so many artists, authors and intellectuals. Bowen’s Sonata, Dale’s Phantasy and the six pieces by Bridge all stem from the period between 1901 and 1910 – a time when the first composers on the Continent were starting to eschew major/minor tonality. Until then, the viola had been completely overshadowed by other solo instruments. If it had now become the object of more frequent attention, this was partly due to the exceptional stature of Lionel Tertis (1876-1975). Since Tertis was the first violist who attained international fame, composers now found it worthwhile to collaborate with him and dedicate works to him.( Excerpt from the booklet notes by Gernot Adrion)

Born in Sapporo (Japan), Yuki Inagawa received her first piano lessons when she was six, and later also studied voice. She studied piano at the Toho Gakuen Academy of Music in Tokyo, and pursued her studies at the Hanns Eisler University of Music in Berlin. Early on, Yuki Inagawa garnered prizes at international piano and chamber music competitions; she has performed recitals in Japan, Hungary and Germany. She was the recipient of the Steinway Advancement Prize in 2003. As a soloist she has given very successful recitals in the major concert halls of Berlin, including the Philharmonie and the Konzerthaus. Regular appearances in different line-ups in festivals and chamber music recitals, orchestral engagements (including many years with Berlin Radio Symphony Orchestra), along with coaching and accompaniment for a series of instrumentalists and choirs round off her multiple artistic activities. Since 2008 she has been teaching piano at Shostakovich Music School in Berlin-Lichtenberg.

Gernot Adrion has held the post of Assistant Principal Viola in Berlin Radio Symphony Orchestra since 1996. Born in Sulzbach-Rosenberg (Upper Palatinate), he studied viola at Nuremberg Conservatory under the tutelage of Prof. Hans Kohlhase. He has won First Prize at a series of competitions: Jugend musiziert (the German national youth competition), IHK (Chamber of Commerce), the Dr. Drexel Competition (Nuremberg) and the German Conservatory Competition in Darmstadt. Adrion gathered orchestral experience in the German National Youth Orchestra, the Young German Philharmonic, the European Union Youth Orchestra (EUYO), and in the Bamberg Symphony. He also cultivates a passion for chamber music. Since 2006 he has been playing together with Susanne Herzog and Hans-Jakob Eschenburg in the Gideon Klein Trio, an ensemble devoted to string trio repertoire from the Early Baroque to the 20th century. Since 2012 he has formed a piano/viola duo with Yuki Inagawa.