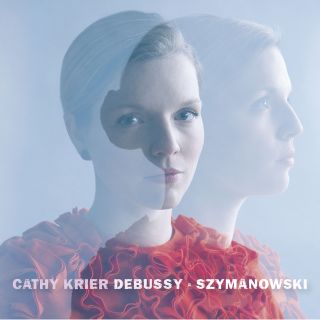 - Cathy Krier has been chosen as ECHO raising star for the season 2015/16, travelling und
concerting all major concert halls around Europe

- Szymanowsky and Debussy have lived at the same time and it was the aim, to show the
conctrasts between the two composers

- 2018 the world will celebrate the 100th anniversary of Debussy death.

„In this new album, Cathy Krier takes an original step and goes entirely against the grain of her previous programmatic approach. In her two most recent CDs she had juxtaposed the apparently divergent styles of Rameau and Ligeti, or Liszt vs. Berg/Schoenberg, uncovering astounding new connections among them. The current release now takes the opposite path. At first glance, Claude Debussy – the inventor of musical Impressionism – and Karol Szymanowski – often called the ‘Polish Impressionist’ – would seem to have much in common. Both composers even use the same title in French: Masques (masks). Cathy Krier affirms, nevertheless, that she is much more interested in the differences one can observe between these two works written roughly during the same period. Our listening experience is thus enriched thanks to a new, fascinating aesthetical perspective. “ (excerpts from the booklet notes by Clemens Matuschek)

„Krier steers her own path between sentimental and spiky, with a bright, forthright tone and an approach that underlines the music’s depth to Schumann and Brahms“ (Boston Globe October 2015)


Her first solo recording with Scarlatti, Haydn, Chopin, Dutilleux and Müllenbach was released in 2008. Her 2013 recording featuring the piano works of Leoš Janá ˇcek released by the German label CAvimusic has been acclaimed by the international press for its originality and its richness. The recording
has been awarded the “Coup de coeur” of France Musique and the “Pianiste maestro” of the French magazine “Pianiste”. In 2014 Cathy Krier released a CD, dedicated to Musica ricercata by György Ligeti and the Pièces de clavecin by Jean-Philippe Rameau, (CAvi-music / Deutschlandfunk) which has been recognized as a recording of reference (Wiener Zeitung). Her latest CD “Piano – 20th Century” with works by Berg, Schönberg, and Zimmermann was released in autumn 2015 and has been acclaimend by Crescendo as “sound and technically flawless interpretation”.