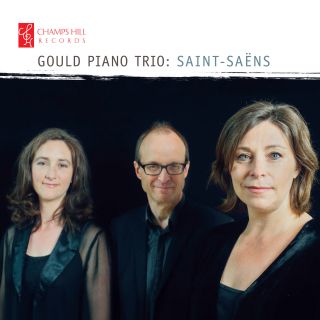 Catalog number: CHRCD 140
Releasedate: 06-04-18
- Internationally acclaimed Gould Piano Trio bring their artistry to trios by Saint-Saëns
- The Gould Trio have been at the forefront of the international chamber music scene for well over twenty years
Internationally acclaimed Gould Piano Trio bring their artistry to trios by Saint-Saëns, and his little known La Muse et le poète on this new recording for Champs Hill. Thirty years separate his Piano Trios Nos 1 & 2, although the first is by no means an immature work – the composer was 28, with two symphonies and violin concertos behind him, and his virtuosity as a pianist shines through right from the opening Allegro. His second trio, composed once he had achieved international fame and experienced marriage breakdown and the loss of his beloved mother, seems more serious in tone and, it could be argued, reflects this. Although Saint-Saëns himself cautioned strongly against the incorporation of subjective emotions into music saying “Art is intended to create beauty and character, feeling only comes afterwards and art can very well do without it. In fact, it is very much better off when it does”. Benjamin Frith, pianist, writes in his introduction to the disc “He was ahead of his time in authentic performance practice habits and an understanding of the classical repertoire, far exceeding that of most of his romantic contemporaries. Saint-Saëns’ very long life took him through the Romantic period well into the age of Debussy and early Stravinsky. Out of kilter with the latter era, for many years he had the reputation of a musical reactionary. Today, however, we can view him with more historical perspective.”

The Gould Piano Trio, recently compared to the great Beaux Arts Trio for its “musical fire” and dedication to the genre in The Washington Post, has remained at the forefront of the international chamber music scene for well over twenty years. Launched by its first prize at the Melbourne Chamber Music Competition and subsequently selected as YCAT Artists, it toured in Europe and the USA as “Rising Stars” and made a highly successful debut at the Weill Recital Hall, described by Strad Magazine as “Pure Gould”. The trio’s appearances at London’s Wigmore Hall include the complete piano trios by Dvorak and Schubert and in the 2017–18 season a Beethoven cycle. At St George’s, Bristol, it performed and recorded these trios live for SOMM Records, arguably the pinnacle of the trio repertoire.

Its discography not only includes the renowned masterpieces of the repertoire but also many hidden gems, brought to life through an ongoing collaboration with clarinettist Robert Plane.

Trio cycles by Hummel (Naxos), Dvorak (Champs Hill Records) and Brahms have been complemented by the late romantic works of Charles Villiers Stanford, John Ireland, Robin Milford, Cyril Scott and Arnold Bax many of which are in world premiere recordings. A disc of contemporary works by Peter Maxwell Davies, Sally Beamish and James MacMillan (Champs Hill Records) was released in 2015 helping to bring contemporary British music to an international public.

Through its annual festivals in Corbridge, now in its nineteenth year, and Cardiff at the Royal Welsh College of Music & Drama, where the trio is Artist in Residence and recently were made Fellows, the Gould Piano Trio takes inspiration from playing a wide range of chamber music with colleagues in Oxford, and coaching aspiring young ensembles. Giving masterclasses at Dartington Hall and Aldeburgh have been rewarding ways of passing on their years of experience.

The trio has been given the opportunity, as Artistic Directors of the 2017–18 Leeds International Chamber Season, to curate a series of six concerts using invited artists as well as themselves to perform works from pre- Revolutionary Russia.

The Trio has been keen to commission new works: James MacMillan’s Piano Trio No.2, premiered to much acclaim at the Bath International Festival in 2014, Simon Rowland-Jones’ Piano Trio No.2 Eidfjord in 2016, a new trio from Mark Simpson After Avedon, and a clarinet quartet by Huw Watkins.

The Trio is delighted that the Simpson, being part of the PRS Beyond Borders scheme, has been chosen for the New Music Biennial in Hull (and at the South Bank in London) as part of the City of Culture celebrations in 2017, a fitting way to mark the 25th anniversary of this renowned ensemble the Gould Piano Trio.