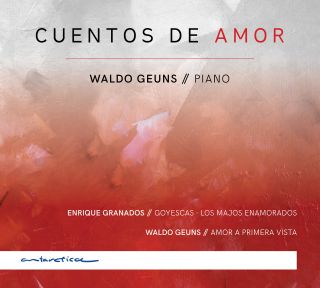 Catalog number: AR 007
Releasedate: 06-04-18
- Compositions by Spanish pianist-composer Enrique Granados
- Waldo Geuns adds a chapter to the story told by Granados, by composing his own piece.
What do we listen to when we play music? We listen to emotion, and passages which inspire. These passages sometimes stay with us in the form of indelible memories, if we hear them at the right time and in the right place. What are these ‘right’ moments? They are the moments during which the music’s emotion matches the events in our lives perfectly. A piece of music – indeed, a single chord may even be enough – can remind us of the joy or sadness we experienced in that moment. Through experiences like these, music speaks to us and becomes part of our lives.

For Waldo Geuns, one such unforgettable musical work is Goyescas by the Spanish composer Enrique Granados. He gives voice to love in all its joyful and challenging moments in this, his greatest piano suite. Granados uses the titles and the scenographic notes in the score to illustrate how two lovers make overtures to each other as they dance, how their relationship blossoms even as it weathers darker days, until fate ultimately takes its toll and one of the lovers passes away, leaving the other behind with nothing but beautiful memories.

Granados, like Sergei Rachmaninov, was one of the last great pianist-composers. His mastery of the piano can be heard in his exceptional virtuosity and lyricism. It inspired Geuns to walk in his footsteps and write his own music, using his melodies as points of departure. Not only did this give Geuns greater insight into Granados’ music, but it also allowed him to add to his story one of the most beautiful moments in a romantic relationship: the moment of first eye contact, and the realisation that one’s life will never be the same from that moment on.

Waldo Geuns is a pianist, philosopher and musicologist who brings these three disciplines into each and every one of his projects.

His style at the piano is marked by a musicality and adroitness which is as rousing as it is considered. His aim with every performance is to create an innovative concert experience. He uses new emotive and philosophical approaches to communicate, to allow us to recall the time when compositions were originally scored. Musically, he opens our senses to the melodies of the past. He delights in alloying classical music with other disciplines, such as fashion, dance, literature, jazz and equestrian shows - an approach which has led to some very successful tours in Belgium. His passion for philosophy and the piano comes through clearly when he speaks at conferences on musicology in cultural institutions or on Radio 1 or Klara (VRT).

Waldo trained with the pianists Jan Michiels, Hans Leygraf and André De Groote after which he continued to hone his craft with the Polish pianist and teacher Wieslaw Szlachta. He has already been awarded a number of prizes, including the prestigious “Mayor Paul Meyers Prize”, and is a musician in residence at Hollands College, Louvain (KU Leuven), giving lectures and recitals there every year.

In addition to his career as a soloist, Waldo also enjoys performing with chamber music ensembles, playing piano for the De Drij Coppen trio (with Hugh Desmond on violin and Stijn Kuppens on cello). He is also one-half of the Doppio Stile duo; with his accomplice Desmond, they tackle music from a philosophical angle.

Owing to this original approach to music, Waldo has had the opportunity to perform in a number of major concert halls in Belgium and beyond, including Amuz and DeSingel in Antwerp, Bozar and Flagey in Brussels and the Mozarteum in Salzburg. He has also been invited to numerous festivals, including the Ten Vrede Festival, the B-Classic Festival (Limbourg, Flanders), Festival van Vlaanderen / Festival 20/21 (Vlaams-Brabant), Jazzathome, the Sopra la Musica Festival and Gentse Vleugels. He has performed as a soloist with a range of orchestras, including Limburgs Kamerorkest, Limburgs Orkest Jeugd en Muziek, Hasselts Symfonieorkest, Frascati Symphonic and symphoniaASSAI, and with such conductors as Wouter Lenaerts, Jasper de Waal, Koen Dries, Willy Claes or Pierre Bartholomee.

As well as sharing his vision of music on stage, he also commits it to paper. After having studied music writing (Royal Conservatory of Brussels) and musicology/philosophy (KU Leuven), Waldo Geuns now regularly writes programme pieces and press articles for cultural magazines such as Staalkaart. In addition, he is also a writer for the Flagey Cultural Centre in Brussels.