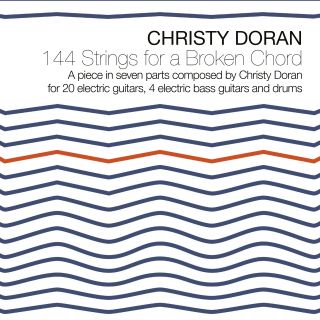 144 Strings for a Broken Chord

Catalog number: BTLCHR 71245
Releasedate: 06-04-18
- 144 Strings for a Broken Chord Composition by Christy Doran for 20 el. guitars, 4 el. basses and drums
-  Excerpts of the concert at Suedpol Lucerne/CH, Sept. 17, 2016.
His bands are called "New Bag”, “Sound Fountain" or "Bunter Hund", and the same thing applies to all of them: nomen est omen. He chooses his co-musicians exclusively according to the pleasure principle, does not know any prejudices not only in this respect, but also plays and has played with Fredy Studer, Urs Leimgruber, Carla Bley, Ray Anderson, Erika Stucky, Marilyn Mazur, Han Bennink, Albert Mangelsdorff, Jamaaladeen Tacuma, Marty Ehrlich and the pipa virtuoso Yang Jing. He detests prohibitions on thinking and pigeonholing, fears nothing and nobody, and hardly hates anything as much as boredom or routine. He regularly jumps back and forth between Jimi Hendrix, Samuel Becket and Chinese folk music in the search for inspiration and seems to expand his artistic portfolio every second. Sometimes the thought of what it might look like in Christy Doran's head comes to mind. Probably untidy, full-packed, rather chaotic, mega-interesting and incredibly fascinating, especially when you discover how much undiscovered and unplayed music is still slumbering in the most absurd formulations.

To be honest. who gets the idea to bundle 20 electric guitars, four electric basses and a drumset into an orchestra that has never before existed in this form? Christy Doran counted them exactly and consequently correctly calls it "144 Strings For A Broken Chord" in view of the tempestuous storm that it creates. In doing this, the jack-of-all-trades on the electric guitar with all its tonal possibilities such as the amps or other electronic devices, his loyal companions over all those eventful decades, creates a highly emotional declaration of love. “Their potential is boundless,” the 68-year-old Swiss musician raved. Not only for him as an instrumentalist, but also as a composer. That's why Doran composed his 144 strings on a corpulent body with seven energetic, bustling, noisy, unpredictable compositions somewhere between rock, contemporary jazz, noise, contemporary classical music, groove and world music. A wild, normally hard to control amalgam that John Voirol had to deal with on the conductor's stand, but which he surprisingly had tightly under control at a concert on September 17, 2016 in Christy's hometown of Lucerne, without robbing the protagonists of their individual freedom.

You have to listen to this sometimes brutal elemental force, which can change into a soft hovering in a matter of seconds, a vacuum of reverberating sound fragments. And note: Each of the 20 guitarists and four electric bassists brings his own personal touch to the daring project, creating a special, original sound that resembles an artistic DNA with the help of smaller or larger instruments. At some point, 24 voices overlay and create a strange shimmering, edgy and quite cool stereo effect. An acoustic as well as a visual natural phenomenon. Another new mutation from Christy Doran's genetic laboratory of united sounds.

He has always been like that. Always on the lookout for the nonconformists, the unusual, the barbs in the flesh of the prosperous mainstream. Born in Greystone, Ireland, and raised in Lucerne, Switzerland, the guitar dervish cannot do otherwise. For "144 Strings For A Broken Chord", he again assimilates particular types of memories, fantasies, information, experiences, moods, influences, grooves and colors. The fact that Doran initiates a resounding festival for the strings in general and the guitar in particular is one of the many facets of this unusual, restless musician.

Christy Doran was born in Dublin, Ireland and has lived in Lucerne, Switzerland since his childhood. His father was an Irish ballad singer, providing Christy with his first exposure to music.

In the 1970´s he was a founding member (along with Fredy Studer, Urs Leimgruber and Bobby Burri) of the seminal Swiss band "OM". Tours throughout Europe, radio/TV - appearances, workshops, music for ballet, theatre and film. Over the years, his career has included countless solo concerts, in which he regularly pushes to the limits the capabilities of a single guitar. He has played in duos with Marty Ehrlich, Harry Pepl, Fritz Hauser, Dave Doran, Dom Um Romao, John Wolf-Brennan, Robert Dick, Ray Anderson, among others. After playing in a trio with Jasper van´t Hof, he went on to form the "Christy Doran´s May 84" septet with Norma Winstone, Trilok Gurtu, Urs Leimgruber, Rosko Gee, Dom Um Romao and Dave Doran. He has been a member of the "Peter Warren Quartet" with Victor Lewis and John Surman, and "RED TWIST & TUNED ARROW" with Stephan Wittwer and Fredy Studer (1985 - 1987).

Christy Doran was also a co-founder of "Doran/Studer/Burri/Magnenat," (later "Doran/Studer/Gerber/Magnenat") and member of a quartet with Bobby Previte, Mark Helias and Gary Thomas. He played in a trio with Marilyn Mazur and Kim Clarke, as well as with Sibylle Pomorin´s "Augeries of Speed" meeting Terry Jenour, Annie Whitehead, Kim Clarke, Herb Robertson, Kamal Sabir. As a member of Urs Leimgruber´s "Ensemble Bleu" he also played with Francoise Kubler, Louis Sclavis, Hans Koch.

1989 began a collaboration with trombonist Ray Anderson, which lead to the trio ANDERSON/BENNINK/DORAN (including drummer Han Bennink), which disbanded 1997.

1993 Christy Doran, together with Fredy Studer started the project "DORAN/STUDER/MINTON/BATES & ALI" play the music of JIMI HENDRIX". 1994 Django Bates was replaced by cellist Tom Cora. 1995/96 the band played in quartet with Phil Minton, Amin Ali, Fredy Studer and Christy Doran. Tours with this band throughout Europe, Scandinavia, the US and Canada.

Christy Doran also teaches at the "Musikhochschule" of Lucerne/Switzerland.