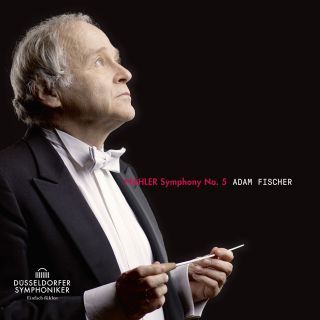 Catalog number: AVI 8553395
Releasedate: 06-04-18
- The fourth release of a successfully started cycle by Adam Fischer and the Duesseldorf Symphonic of which Adam Fischer is artistic director.
- The BBC Music Magazine about No. 4: “It’s also the alternation between cataclysm and serenity that Fischer and his fine Dusseldorf musicians capture so well in this live account”. (Nov 2017)
- Adam Fischer is no close friend of any romanticism but a straight and very much looking at the contents and development making music leader.

What does Mahler’s Fifth mean personally to you? Unlike certain other Mahler symphonies, I have no personal story I associate with the Fifth. This
doesn’t imply that it is not just as close to me as the other ones; it is just more difficult to express the connection in words.

In 1905, Mahler recorded his own interpretation of this symphony’s first movement on a Welte-Mignon piano roll. Does such a historical document have an influence on you? Certainly. We should try to grasp Mahler’s intentions, but we should not apply them without using our own discretion. The Welte-Mignon recording is an important document to help us learn how to deal with Mahler’s tempo indications. There are those well-known indications of the length of his own orchestral performances: they show, for instance, that the Adagietto, in particular, should be played much more rapidly than we think. Incredibly fast runtimes were clocked in Saint Petersburg and also at the Concertgebouw: when we compare them with the movement runtimes as performed by famous conductors of the 1950s and 1960s, we can tell that “slow”, for Mahler, does not mean “dragging”.

Most of all – this is my fundamental conviction, and here I find it confirmed – slow and fast aren’t just metronome values. You can play faster while sounding slower, and vice-versa. It does not just have to do with maintaining a slow tempo, but with managing the accents so that it also sounds slower.
Sounding slower is more important than merely being slower. You can hear this in the Welte-Mignon recording: Mahler treats his own music in a thoroughly rhapsodic way.

At the beginning of the 2015/16 season, Adam Fischer was appointed Principal Conductor of the Düsseldorfer Symphoniker and Artistic Consultant of the Düsseldorf Tonhalle. He is also Honorary Conductor of the Austrian-Hungarian Haydn Orchestra, founder of the Eisenstadt Haydn Festival, and founder and director of the Wagner Festival in Budapest. Well-known for his courageous political commitment, Adam Fischer has spoken out often in favor of human rights. Together with András Schiff he initiated and signed a petition against racism and discrimination, which they submitted to the European Union. Born in 1949 in Budapest, Adam Fischer studied composition and conducting in the Hungarian capital, and with professor Hans Swarowsky in Vienna. After appointments as Kapellmeister in Helsinki, in Karlsruhe and at Munich State Opera, Fischer held the post of General Music Director successively at the opera houses of Freiburg, Kassel and Mannheim, and was also Music Director of Hungarian State Opera in Budapest. Since 1999 he has been Chief Conductor of the Danish National Chamber Orchestra in Copenhagen. Regular engagements have led Adam Fischer to perform in the great opera houses of Europe and the US, including Vienna, Milan, Munich, Covent Garden, the New York Met and Bayreuth Festival. In orchestra appearances he also conducts the Vienna Philharmonic, the Vienna Symphony, the Munich Philharmonic, the Orchestre de Paris, the London Philharmonic (LPO), the Orchestra of the Age of Enlightenment, the Chicago and Boston Symphonies and the NHK Symphony in Tokyo. Fischer’s award-winning CD releases include the complete symphonic works of Haydn (distinguished with the German national prize “Echo Klassik”) as well as of Mozart.   has also been awarded the GrandPrix du Disque twice: for his recordings of Die Königin von Saba (Goldmark) and of Bluebeard’s Castle (Bartók). In 2017, Adam Fischer was named Honorary Member of Vienna State Opera.