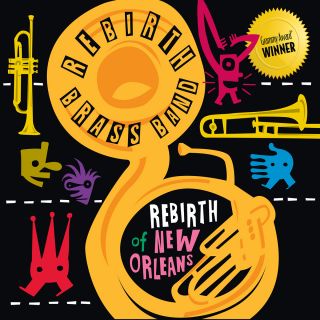 Grammy Award winner. 6 weeks at #1 on the CMJ Jazz radio chart. Thirteen weeks on the Billboard Jazz chart. OffBeat Best of the Beat winner for Best Brass Band album. Finalist for Gambit Weekly’s Big Easy Entertainment Award for Album of the Year.
Hailed by the New York Times as “a New Orleans institution,” the Rebirth Brass Band have been at the forefront of the brass band revival that they helped kick off over 30 years ago. Formed by the Frazier brothers, Phil and Keith, along with Basin Street labelmate Kermit Ruffins in 1983, The Rebirth Brass Band has gone from playing on corners in the French Quarter to selling out concert halls across the world and appearing in David Simon’s HBO hit Treme. While committed to upholding the tradition of brass bands, they’ve also extended themselves into the realms of funk and hip-hop to create their signature sound. “Rebirth can be precise whenever it wants to,” says The New York Times, “but it’s more like a party than a machine. It’s a working model of the New Orleans musical ethos: as long as everybody knows what they’re doing, anyone can cut loose.” It perhaps can’t be put more simply than in the words of Red Hot Chili Peppers bassist, Flea, “Just saw THE REBIRTH BRASS BAND, unbelievable. Hard as hell, free as a ray of light, there is not a band on earth that is better. Stunning.”
No band exemplifies the essence and soul of New Orleans like Rebirth Brass Band.