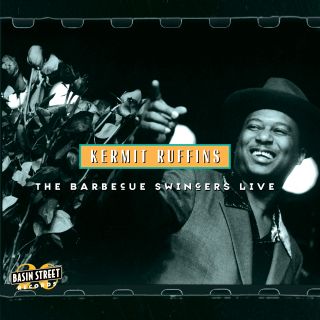 This is where it all began. The first recording on the Basin Street Records label. Recorded in front of a sell out crowd at world famous Tipitinas. No one represents New Orleans music like Kermit Ruffins and the Barbecue Swingers; a true New Orleans institution. Re-issued in honor of our 20th anniversary! Completely remastered and pressed to 150g, TRANSLUCENT GREEN vinyl. This configuration limited to only 500 copies. All vinyl comes with a free digital download.
“Phenomenal”- OffBEAT Magazine
“Tasty” – JazzTimes

2017’s A Beautiful World finds the trumpeter/vocalist partnering with long-time labelmate Irvin Mayfield in the centerpiece release for Basin Street’s 20th anniversary celebration. The two most recorded Basin Street artists bring in the assistance of nearly 60 musicians including several New Orleans legends in an album that seeks to capture the inimitable soul of Ruffins with tunes ranging from the Bobby McFerrin classic “Don’t Worry Be Happy” to Ruffins classics like “Good Morning New Orleans” to straight-up bounce tracks like “Trumpet Bounce.”