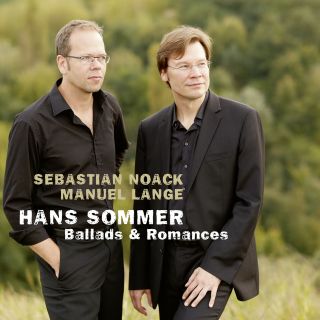 Today it has mostly been forgotten that one of the founding fathers of German music copyright, Hans Sommer, whose real name was Hans Friedrich August Zincken (1837-1922), was also a prolific composer. Although the close connection between music and the educated middle class was taken for granted, the act of composing – either as a dilettante or as a professional – was still considered a hazardous venture. Hardly anyone could devote themselves entirely to composition without additional income from performance or teaching.

Sommer took his first composition lessons in the 1850s, while studying mathematics and physics with Prof. Julius Otto Grimm in Göttingen; and then with Adolf Bernhard Marx during an extended stay in Berlin. After returning to Braunschweig (Brunswick), his home town, in the 1860s, he pursued his studies with Wilhelm Meves (1808-1871).

Finally, in 1881, at the age of 47, Sommer withdrew into a more private existence to devote himself entirely to his musical inclinations – thereby abandoning his established scientific career (for instance, he had worked for the renowned Voigtländer camera firm).

Music history was in clear upheaval. Historiographers tend to depict the blossoming of different styles by selecting certain composers or ‘schools’, but many more musical trends existed than we are aware of today…..(excerpt from the liner notes by Jürgen Schaarwächter)

Sebastian Noack studied voice with Ingrid Figur and Dietrich Fischer-Dieskau in Berlin, and went on to take postgraduate lessons from Thomas Quasthoff. At the German National Voice Competition (Bundeswettbewerb Gesang) he won First Prize, as well as Second Prize at the International Wigmore Hall Song Competition in London.

Noack is active as an opera and concert soloist on the international scene, collaborating with eminent conductors of the likes of Christoph Eschenbach, Semyon Bychkov, Marin Alsop, Kirill Petrenko, Helmuth Rilling, and Philippe Herreweghe. He is often invited to appear at illustrious festivals including
Rheingau, Schleswig-Holstein, Lake Constance, the Oregon Bach Festival, the Israel Chamber Music Festival, the Schwarzenberg Schubertiade, and the Ruhrtriennale. His wide range of repertoire extends from the Renaissance to contemporary music.

He has honored engagements to sing at prominent venues such as the Staatsoper in Berlin (Donizettis Viva la Mama), the Staatstheater in Halle (Wolfram in Tannhäuser), the German National Theatre in Weimar (Kurwenal in Tristan and Isolde), the Deutsche Oper in Berlin (with conductor Donald Runnicles), the Nederlandse Reisopera in Enschede, and the Teatro Municipal in Rio de Janeiro. Sebastian Noack has participated in a great number of CD productions and broadcast recordings (for Harmonia Mundi, Carus, ChannelClassics, SWR, NDR, Deutschlandradio and many other entities).

In 2015, OehmsClassics released his recording of the Dichterliebe cycle along with further Heine settings by Robert Schumann. Sebastian Noack is Professor of Voice at the Hanns Eisler Academy of Music in Berlin.

MANUEL LANGE Piano
The Berlin-born pianist studied piano with Oleg Maisenberg in Stuttgart and Hans Leygraf in Salzburg and Berlin. He also took song masterclasses with Dietrich Fischer-Dieskau, Aribert Reimann and Wolfram Rieger. During his studies, he won first prize for piano accompaniment in the international Paula Salomon-Lindberg Song Competition „Das Lied“, the special prize for best piano accompaniment at the Hilde Zadek Voice Competition in Passau and the Hanns Eisler prize at the Academy of Music „Hanns Eisler“.

In 2006, he came together with baritone Sebastian Noack to found the MEISTERLIED concert series in Berlin, which is primarily dedicated to German romantic Lied. After several years of working as Song Repertoire Professor at the Berlin University of the Arts, Manuel lange accepted a call of the Hochschule für Musik Detmold to become Professor of Lied Accompaniment and Lied Composition.

Manuel Lange lives with his wife and two children in Berlin. He is the twin brother of the composer Marius Felix Lange.