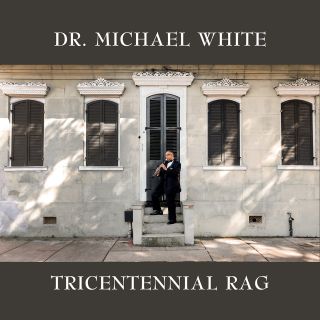 Catalog number: BSR 05072
Releasedate: 06-07-18
- Album coincides with and celebrates New Orleans Tricentennial
- Dr. Michael White is one of the most critically acclaimed Clarinetists and New Orleans music scholars in the world
Dr. Michael White Celebrates 300 Years of New Orleans Music with Tricentennial Rag
The tricentennial of New Orleans is the perfect time to reflect on the culturally rich city’s most important original artistic contribution: jazz. Acclaimed clarinetist Dr. Michael White sets out to do just that on his newest release, Tricentennial Rag. Few people stand as qualified as Dr. White for such a task with a decades-long career as a New Orleans-born musician and accolades including: Heritage Fellow of the National Endowment for the Arts (the nation’s highest award in the traditional and folk arts), six-time winner of Offbeat Magazine’s “Clarinetist of the Year,” Louisiana Endowment for the Humanities Humanist of the Year, The Jazz Hero Award from the Jazz Journalists Association of America, and several TV appearances including performing the National Anthem at the Allstate Sugar Bowl, HBO’s Treme, and many song placements in the CW’s The Originals.

Tricentennial Rag features a “gumbo pot” of song ideas, all of which are originals save the famous “When The Saints Go Marching In,” that span in style from the earliest jazz with Jelly Roll Morton-inspired tunes such as “Mandeville Stomp” that has a ragtime feel spiced with Charleston and Latin rhythms, to “revival-style” up-tempo tunes like “I Saw Jesus Standing in the Water,” to songs like the title track “Tricentennial Rag” which stands in a category of its own as a “modern” 21st century rag by both engaging with and departing from traditional ragtime forms and using an infectious repeated four-bar main section as much influenced by pop music as by early jazz and rags. The eclectic sounds don’t stop there, and other themes include the lively brass band sound reminiscent of New Orleans Carnival parades and activities present on “On Mardi Gras Day,” a medium-tempo blues on “Blues on the Bayou,” and the joyous “flirt song” in the tradition of old pop love songs, “What I Wouldn’t Do To Be With You.”

Dr. Michael White continues to push forward in his mission to keep New Orleans jazz both traditional and fresh on Tricentennial Rag, a satisfying bookend to the first 300 years of New Orleans music, and a launching-point for the next era of both preservation and innovation in the music of the Crescent City.

Dr. Michael White is an accomplished, multi-faceted New Orleans-based clarinetist, bandleader,
composer, musicologist, jazz historian, and educator widely regarded as one of the leading authorities
and culture-bearers of traditional New Orleans jazz music. He has performed in over two dozen foreign
countries, played on over 50 recordings, received countless awards, made multiple national television
appearances, and been featured in major media publications.

Despite an upbringing in the Carrollton neighborhood of New Orleans, and a bloodline to some of the
earliest jazz musicians, Michael White did not get his start playing jazz. An aunt who played clarinet
inspired him to take up the instrument in elementary school, where he primarily studied symphonic music
and marched with the famed St. Augustine Marching 100. It wasn’t until much later, in his late teens, that
he first heard live New Orleans jazz played at Jazz Fest, and he became inspired by the music of the city.

He would play his first professional gig with Ernest “Doc” Paulin’s Brass Band in 1975 at a church parade.
His jazz career grew, as he played primarily in social club parades and jazz funerals with Paulin’s group
and other bands and musicians including the Danny Barker-founded Fairview Baptist Church Marching
Band and George “Kid Sheik Cola” Colar.

In the late 1970s, White discovered a recording of George Lewis that would serve as his primary
inspiration to pursue a life as a New Orleans jazz clarinetist. He would later dedicate an album in honor
of the New Orleans musician, the 2000 release, A Song for George Lewis (Basin Street Records). In
addition to Lewis, Dr. White cites several other clarinet influences including: Sidney Bechet, Johnny
Dodds, Barney Bigard, Paul Barnes, and Willie Humphrey.

He formed his first group, the Original Liberty Jazz Band, in 1981. A band that regularly performs in New
Orleans, and that held a weeklong annual residency around New Year’s Eve at The Village Vanguard in
New York City for many years. He continues to lead that band as well as two smaller groups, the Liberty
Brass Band and the Michael White Quartet. Since 1979 he has also played in the Young Tuxedo Brass
Band, founded by clarinetist John Casimir sometime in the 1940s. During this early part of his career, he
had the opportunity to play alongside more than three dozen traditional jazz musicians born between
1890 and 1910.

It is White's crystal-clear clarinet that can be heard on Wynton Marsalis' critically hailed 1989 release,
The Majesty of the Blues (Columbia Records). White worked with Marsalis, the artistic director for Jazz at
the Lincoln Center in New York, on A Tribute to Jelly Roll Morton, a series of concerts that were
performed there, and that were reviewed favorably by Jon Parales of the New York Times. White also
served as musical director for concert tributes to King Oliver and Sidney Bechet that were collaborations
with Marsalis and the Lincoln Center Jazz Orchestra. He has since served as an artist-in-residence for
Lincoln Center Jazz Orchestra. In addition to his collaboration with Marsalis, White’s unique clarinet
sound has been included on recent recordings by several legends of popular music, including Eric
Clapton, Taj Mahal, Paul Simon, and Marianne Faithful.

Throughout the 90’s Michael White recorded a variety of records with multiple record labels including
1992’s New Year’s Eve Live at The Village Vangaurd (Antilles). The year 2000 marked the beginning of his relationship with New Orleans-based label, Basin Street Records, which has released the majority of
his solo work including A Song for George Lewis (2000), Jazz from the Soul of New Orleans
(2002), Dancing in the Sky (2004), the post-hurricane Katrina reflective Blue Crescent (2008), the two
part Adventures in New Orleans Jazz, Parts 1 & 2 (2011, 2012), and Tricentennial Rag (2018).

White faced a momentous year in 2005—the spiritual high of taking his band on an international tour of
Europe, and later the emotional low of facing the devastation of Hurricane Katrina. White’s Gentilly home
was flooded with seven feet of water, and his entire collection of invaluable historical musical
memorabilia and music collection were destroyed. He managed to cope with the loss through an artists’
retreat where he generated material for Blue Crescent (2008), an album that received the following
praise from John Swenson of Offbeat Magazine, “Dr. Michael White has produced what must surely be
one of the greatest examples of New Orleans traditional jazz ever recorded.”

In 1980 White began teaching Spanish at Xavier University, while he maintained a career as a gigging
musician. His relationship with the university would grow over the years, and led him to being awarded the
Rosa and Charles Keller Jr. Endowed Chair in the Humanities, under which he currently teaches African
American Music. Dr. White does extensive work hosting workshops and teaching about New Orleans
music, including guest coaching at Julliard School of Music. Since 1995 he has served as the main
consultant for traditional jazz for the New Orleans Jazz & Heritage Festival. In 2002 he began producing
the Culture of New Orleans Series at Xavier University, a highly successful program of over two dozen
lectures, concerts, and film presentations featuring the authentic traditions and people of New Orleans.

Michael White continues an active career in a variety of capacities, and his collection of awards,
accolades, and accomplishments is ever-growing. These include receiving the rank of Chevalier of Arts &
Letters from the French government in 1995, being awarded the 2008 Heritage Fellow of the National
Endowment for the Arts (the nation’s highest award in the traditional and folk arts), and being named the
2010 Louisiana Endowment for the Humanities Humanist of the Year. He has been awarded Clarinetist of
the Year by Offbeat Magazine in 2010, 2013, 2014, 2015, 2016, and 2017 in addition to winning Best
Traditional Jazz Artist of the Year from Gambit Magazine’s Big Easy Awards in 2010. In 2012, he made
several national television appearances: The Allstate Sugar Bowl National Anthem, HBO’s Treme,
National Geographic Channel’s America’s Lost Treasures, International Jazz Week Celebration—various
news channels, and CNN’s New Year’s Eve Celebration. He has also been featured on NPR’s Music Inside
Out with Gwen Thompkins. In 2015 he received the Jazz Hero Award from the Jazz Journalists
Association of America, and he produced the recording New Orleans Brass Bands: Through the Streets
of the City for the Smithsonian Institution.

With a career now spanning over three decades, Michael White continues to grow his musical legacy as
one of the authoritative figures on New Orleans Jazz Music, and one of the finest clarinetists to walk the
streets of the crescent city.