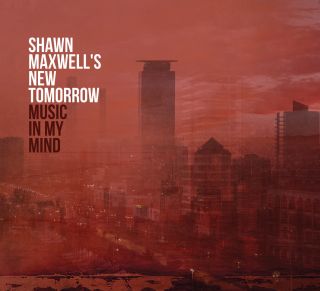 Music in My Mind

Catalog number: OA2 22155
Releasedate: 06-07-18
- saxophonist Shawn Maxwell has released several recordings featuring his quartet
- "...a marvelously collaborative spirit...the innovative impulse that motivates this colorful project is refreshing." - DOWNBEAT
One of the preeminent performers in Chicago jazz, saxophonist Shawn Maxwell has released several recordings featuring his quartet or his sonically expanded dectet, "Alliance." With his New Tomorrow group, he augments his working quartet with the singular trumpet voices of three of Chicago's finest ­- Victor Garcia, Chad McCullough and Corey Wilkes - and the inspired and often dazzling vocalist, Dee Alexander,­ for a set of ten modern, electric originals. Focusing on composition as much as improvisation, the quintets reveal stunning melodies hidden within complex time signatures, textures and grooves.
To a remarkable degree, Shawn Maxwell has the urge—a quality fundamental to those who create improvised music on a nightly basis. In this way, it is not enough to simply create, but the need to innovate that guides each note. His art lies in addressing the ordinary modalities of life in an extraordinary way, placing notes in their most complimentary places with precision and enthusiasm. Of course, there's the way he plays. Maxwell's style was built around swelling harmonic runs while painting complex melodies across an expansive canvas. Each harmony he creates is purposeful in form as well as function.

By all accounts, Shawn Maxwell formed his style early on the streets of Joliet, Illinois. From the time a saxophone first touched his lips, Maxwell knew that music was his calling. With conviction and abilities that belied his age, it was equally clear to others that Shawn Maxwell was destined to be a musician. He quickly became a celebrated performer in the Joliet Central High School band program where his prowess as a soloist was on regular display. Shawn further refined his art in a post-secondary setting, absorbing all that his instructors could teach - earning a Bachelor's Degree in Music from Millikin University in 1999. Shawn then signed with the prestigious and legendary Conn-Selmer Company to join their Performance and Educational Artist Roster.