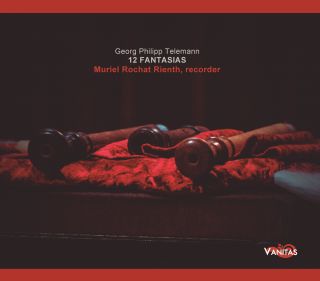 Telemann was a musician and composer who lived and worked in Leipzig, Sorau, Eisenach, Frankfurt/Main, and Hamburg. He is considered the most important German composer of the late baroque era, and an extraordinarily productive musician with an oeuvre of over 3,600 works which cover all genres, including opera. He was one of the few artists of his era who was well respected during his lifetime, and he was able to live comfortably from his work as a musician. He was entirely self-taught, playing a variety of instruments, including the recorder, the violin, and the harpsichord. He was also a great proponent of the recorder, which is why he (along with Händel) is often described as the greatest recorder composer. His work for the 'flauto dolce' includes solo concerts, suites, sonatas, trio sonatas, as well as extended recorder parts in oratorios, passions, and cantatas. Of special significance are the "12 Fantasias for Solo Flute", published in Hamburg in 1.733, which,  along with the "36 Fantasias for Harpsichord", the "12 Fantasias for Solo Violin" (1.753), and the "12 Fantasias for Viola da Gamba" (1.735), complement Telemann's oeuvre for solo instruments without bass accompaniment.

The "12 Fantasias" recorded on this CD are based on a transposition for treble recorder (raised by a third) which is stored in the library of the Conservatoire Royal de Musique in Brussels. In the 18th century it was quite common for recorder players to perform their own versions of well-known works. Telemann's "Fantasias" quickly gained in popularity. Johann Joachim Quantz, Frederick the Great's recorder teacher, recommended them as a "prime example of virtuosic flute music".

Born in Basle (Switzerland), Swiss recorder player Muriel Rochat Rienth finished her studies (solo diploma) at the Schola Cantorum Basiliensis with Michel Piguet. She plays regularly the famous recorder concertos by Vivaldi, Sammartini, Telemann with different Swiss orchestras and is the director of her own baroque ensemble, LA TEMPESTA BASEL, awarded with the Swiss ORPHEUS-prize. Recent concerts include performances in Switzerland, Spain, Belgium, France, Germany, Italy and Austria. She recorded with his ensemble two CDs for Spanish label Enchiriadis, both highly acclaimed by the international music press: in 2009 the Tenor Cantatas and Recorder Sonatas by J.C. Pepusch and, in 2014, the Tenor Cantatas and Recorder Sonatas by Telemann with her husband, tenor Felix Rienth, elected among the “10 best CDs of the month” by Spanish magazine RITMO and called “Excellent disc” by FANFARE (USA). In 2015 she published Handel’s Complete Recorder Sonatas with harpsichordist Andrés Alberto Gómez, again elected among “Best CDs of the month” by RITMO and enthusiastically reviewed by German, Swiss, Italian, Dutch, Spanish, Italian and US magazines (FANFARE). Further CD projects for VANITAS include Veracini’s Recorder Sonatas and an Italian programme with LA TEMPESTA BASEL. Muriel Rochat Rienth teaches at the Conservatoire de Fribourg (Switzerland).