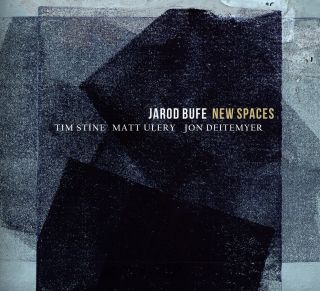 With an ongoing residency at Chicago's famed Fitzgerald’s over the last 5 years, saxophonist Jarod Bufe took the opportunity to develop a body of new compositions while honing an intuitive group aesthetic with this band of top-flight Chicago artists. Written during a period of life changes, Bufe's tunes convey all the emotions that implies, but through the creative rhythmic vitality generated by drummer Jon Deitemyer and bassist Matt Ulery, the feeling of hope and of the ongoing search is never lost. Guitarist Tim Stine's improvisatory approach with surprising, unfurling lines, beside his understated chordal accompaning of Bufe's tradition-rich lyricism, defines this very personal and conversational session.
Saxophonist Jarod Bufe has been active in the realms of woodwind repair and music performance since moving to Chicago in 1996. Soon after arriving, he established himself as one of the first-call saxophone repairmen in the area, while performing primarily as a section player in local big bands. In the early 2010s, his affiliation with the musician-curated Ratchet Series at the Skylark in Pilsen reinvigorated his longtime interest in original composition and improvisation in small group contexts. Today, Jarod maintains an active repair practice—counting many of Chicago's finest professional musicians and music educators among his loyal clientele—while regularly performing his original music with his quartet and trio at such area venues as FitzGerald's, the Whistler, and Elastic Arts. His principal collaborators to date include guitarist Tim Stine, bassist Matt Ulery, and drummer Jon Deitemyer, as well as bassists Anton Hatwich and Christian Dillingham, and drummers Quin Kirchner and Frank Rosaly. The debut album by the Jarod Bufe Quartet, featuring all original material, is scheduled for release in 2018.