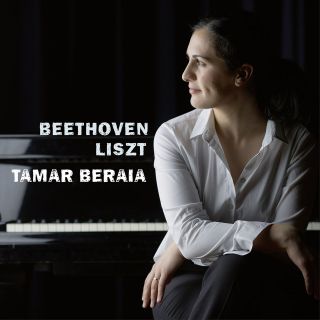 - Born Georgian pianist, living in the Ukraine and Switzerland comes from a musician’s family.
- Many prizes are accompanying her on her career as many scholarships such as Elisabeth Leonskaja
- Her Excellent technique, but most and for all a very deep understanding of the musical structures had been testified in many high concert reviews throughout Europe

MY FAVORITES: BEETHOVEN AND LISZT

It is an enormous pleasure for me to introduce my second solo CD album, featuring works by Beethoven and Liszt. These two composers have exerted a strong influence on me throughout my life and played a paramount role in forming me as a musician. I could be wild and unlimited in expression in Liszt, sincere and firm when playing Beethoven. The two, in tandem, always helped me convey my complex individuality.

I was 17 years old when I experienced my first encounter with the most sublime works these two composers ever wrote. Beethoven‘s Hammerklavier Sonata in B flat Major, Op. 106 and Liszt’s Sonata in B Minor introduced me to new worlds of imagination, sounds, forms, and shapes. I was riveted by their intensity of expression, by the contrasts and the poetry they contain. It felt like diving beneath the surface of the ocean to discover a completely different universe with new colours, shapes and unusual movements, or like being catapulted to the cosmos, surrounded by infinite space and time,
exposed to the wonder and mystery of the Universe.... Liner notes by Tamar Bereia

Georgian/Swiss pianist Tamar Beraia was born in Tbilisi (Georgia) into a family of musicians. She received most of her training in Georgia: first piano lessons from her mother at the age of five, then continuing with Dodo Tsintsadze at the Z. Paliashvili Central Music School, and with Nana Khubutia at the Tbilisi State Conservatoire. She completed her studies with Ivan Klánský in Lucerne.

She is a prizewinner of many national and international competitions, including the Third Prize ex-aequo, the Bronze Medal, and the Sony Audience Prize at the Seventeenth Paloma O‘Shea Santander International Piano Competition. During her studies she was supported by various scholarships, including those awarded by the M. Tariverdiev Foundation and the eminent pianist Elisabeth Leonskaja. With her sister Natia Beraia, she plays duo since childhood, both in four-hand and two-piano repertoire. In February 2014, Tamar’s debut CD Portrait was released on the EaSonus label. Since 2015,

Tamar Beraia has been supported by the Bayer AG firm’s cultural department within the framework of their stART programme. Engagements include recitals at the Philharmonie de Luxembourg and at Wigmore Hall, as well