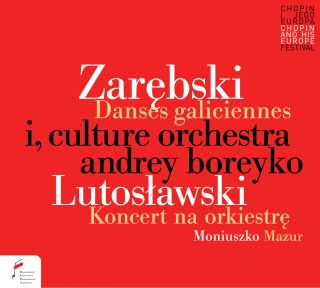 Catalog number: NIFCCD 055
Releasedate: 21-06-19
to be added by Mario
The most recent CD in the Concerts Frozen in Time series is a recording of a concert that took place on 13 August 2017 as part of the Chopin and His Europe festival organized by The Fryderyk Chopin Institute.

At that time, the I, Culture Orchestra performed Witold Lutosławski's Concerto for Orchestra, Juliusz Zarębski's Galician Dances and the Mazurka from Stanisław Moniuszko's Halka under the baton of Andrey Boreyko. Juliusz Zarębski's 3 Galician Dances, in Ferenc Liszt's instrumentation for symphonic orchestra, are being released for the first time in world recording history.

The I, Culture Orchestra is an international ensemble of young musicians whose increasingly high level of performance is being appreciated by music lovers, journalists, experts and distinguished soloists. The establishment of the orchestra was guided by the idea of solidarity and the postulate of building bridges over and above cultural and political divisions. Founded by the Adam Mickiewicz Institute in 2011, the project is a special opportunity for young musicians from Poland, Armenia, Azerbaijan, Belarus, Georgia, Moldova and Ukraine to meet each other.

Andrey Boreyko numbers among the most highly-rated conductors of our time, collaborating regularly with superb orchestras from all over the world.
The Concerts Frozen in Time – Red Series, which enjoys popularity and critical recognition, is comprised of unforgettable concerts given during the Chopin and His Europe festival, preserved in top-quality live recordings. Superb interpretations, the magic of a moment that we can experience yet again.


The I, Culture Orchestra is among the most dynamically developing youth orchestras in the world. An international ensemble of young musicians, its progressively masterful performances has received praise from music aficionados, journalists, experts, and eminent soloists. Founded on the idea of solidarity, the Orchestra postulates bridging cultural and political divides. The Orchestra was established by the Adam Mickiewicz Institute in 2011 as a unique meeting platform for young musicians from Poland, Armenia, Azerbaijan, Belarus, Georgia, Moldova and Ukraine. In rehearsing, performing, and touring together, the young musicians gain invaluable experience in building relations, collaborations, and communities based on mutual trust. Since its founding, the I, Culture Orchestra has played over 41 concerts in more than 25 cities, performing at some of the most prestigious venues and festivals in Great Britain, Germany, Belgium, Spain, France, Sweden, Iceland, Denmark, Lithuania, Belarus, Georgia, Moldova, and Ukraine, with a total of over 600 young musicians participating in the project. The Orchestra has performed with outstanding soloists such as Julian Rachlin, Truls Mørk, Lisa Batiashvili, Alice Sara Ott, and Arabella Steinbacher, among others. In 2015, the ensemble performed a special concert at Maidan Nezalezhnosti in Kiev to celebrate Ukraine’s Independence Day. After a series of extensive master classes in 2016 held by members of elite symphony orchestras, among others the Philharmonia Orchestra and the London Symphony Orchestra, the I, Culture Orchestra went on its sixth concert tour. The 2017 ‘True Emotions Inspire’ tour was conducted by the eminent Polish-Russian conductor Andrey Boreyko.

Between 1992 and 2017 he was music directors of the symphony orchestras in Poznan, Jena, Winnipeg, Hamburg, Duesseldorf, Bern, National Orchestra of Belgium. He is also music director of the Naples Philharmonic Orchestra in Florida and principal guest conductor of the Basque National Orchestra. He has won the German Music Publishers’ Association prize for concert programming in an unprecedented three consecutive seasons. He has worked with such orchestras as the New York Philharmonic, Los Angeles Philharmonic, the Cleveland and Philadelphia orchestras, the symphony orchestras of Toronto, Chicago, Boston and San Francisco, and also leading European orchestras: the Berliner Philharmoniker, Royal Stockholm Philharmonic, Koninklijk Concertgebouworkest in Amsterdam, Leipzig Gewandhausorchester, Staatskapelle Dresden, Wiener Symphoniker, Orchestre de Paris, Tonhalle Orchester in Zurich, London Symphony Orchestra, Rotterdams Philharmonisch Orkest and London Philharmonic Orchestra. In the 2014/2015 season, he led the LA Philharmonic in the first US performance of Górecki’s Fourth Symphony. His discography includes such highlights as Pärt’s Lamentate and Silvestrov’s Sixth Symphony with the Radio-Sinfonieorchester Stuttgart des SWR (for ECM) and a premiere.