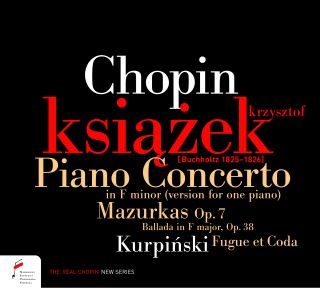 Catalog number: NIFCCD 056
Releasedate:
to be filled in by Mario

The première recording on a copy of Fryderyk Chopin’s Warsaw piano: a Buchholtz from ca. 1825. The album, recorded in January 2018 and released for the festive presentation of the instrument on 17 March 2018, is at the same time the first recording on a period instrument by young Polish pianist Krzysztof Książek.

This is a unique release in the critically-acclaimed series The Real Chopin, providing the opportunity to encounter the exceptionally beautiful sound of the instrument as the composing and concertizing composer probably heard it.

Born in 1992. He reached the third round in the 17th International Fryderyk Chopin Piano Competition in Warsaw, winning two hors concours prizes. Since 2005, he has trained with Stefan Wojtas, first as a pupil of the Fryderyk Chopin Secondary School of Music in Cracow and then as a student of the Feliks Nowowiejski Academy of Music in Bydgoszcz. He is now pursuing post-graduate studies with Arie Vardi at the Hochschule für Musik, Theater und Medien in Hanover. He has won many prizes in Polish and inter- national competitions, including the Grand Prix and the special prize for

the best performance of works by Chopin in the 10th Ludwik Stefaƒski and Halina Czerny-Stefaƒska Piano Competition in P∏ock (2008), the Grand Prix and a special prize in the Lviv International Chopin Competition (2010), Second Prize and the special prize for the best performance of a work by Ignacy Jan Paderewski in the American Paderewski Piano Competition in Los Angeles (2013), First prize and a special prize in the All-Poland Fryderyk Chopin Piano Competition in Warsaw (2013) and Third prize in the Concours International de Piano de l’Orchestre Philharmonique du Maroc (Rabat and Casablanca, 2016), First Prize at the 4th International Piano Competition Halina Czerny-Stefaƒska in memoriam (Poznaƒ, 2017). He has performed during the International Music Festival ‘Chopin and his Europe’, the Duszniki- -Zdrój International Chopin Festival, the ‘Silesia’ international Festival for Young Music competition Laureates in Katowice and the Arthur Rubinstein philharmonic Orchestra of ̧ódê’s ‘premia’ Festival. He has performed in concert in Japan, the UK, Germany, France, Switzerland, Italy, South Africa, the US, Poland, Slovakia and Hungary. He has been awarded grants by the Ministry of Science and Higher Education, the Ministry of culture and National Heritage and the pro Musica Bona Foundation, as well as the ‘Young Poland’ scholarship programme. In March 2014, he received a Krystian Zimerman Scholarship. He also has an interest in chamber music, training with Kaya Danczowska, Justyna Danczowska and S∏awomir Cierpik.

He performs in a piano duet with his wife, Agnieszka Zahaczewska-Ksià ̋ek. 2016 saw the release of a CD with Chopin’s concerto in E minor, which he performed with the Santander Orchestra and José Maria Flor ̆ncio. In 2017 Ksià ̋ek’s solo Chopin recital disc was released. This CD is debut recording on a period piano. The artist is represented by the Ludwig van Beethoven Association.