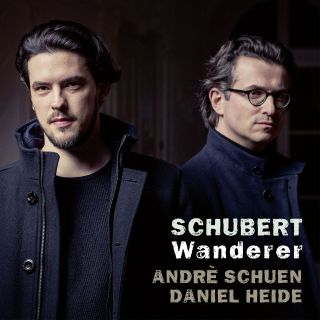 - This is Andrè Schuen’s third album after Schumann/Wolf/Martin and Beethoven’s Scottish & Irish Lieder which had been rave reviewed all over
- Andrè Schuen counts as one the young stars in world of Singers, not only participating at the highest level’s festivals like Salzburg, Munich, Vienna and international opera houses.
- Daniel Heide, from Weimar, has increasing requests for highly recommended Lieder recitals throughout Europe and is settling as one of the most important partner for singers.

Andrè Schuen: "This time, as a point of departure, we chose the idea of “wandering”, of a “journey”, a “path”, and tried to come up with all possible variants. Three major themes emerged. On the one hand, we have Romantic “wandering” per se, which plays an important role in Schubert (as in Der Wanderer on a poem by Schlegel). Secondly, the path to the beloved as in Auf der Bruck as well as in Willkommen und Abschied. The third theme is the journey to the afterlife or to death, as in Totengräbers Heimwehand Im Abendrot. In my view, these three principle themes imbue our programme with a kind of ambivalence, reflecting a general ambivalence that is omnipresent in Schubert.

Daniel Heide: The overwhelming quantity of songs that are often slow and address themes of sadness and yearning is actually one of the core issues in Romantic Lied repertoire – indeed, why do they have to be so plodding, so sorrowful, so full of longing? Where is the cheerfulness? Is there any life-affirming element to be found?

If you take stock of all the lieder composed by Schumann, Brahms, Wolf, Mahler, Strauss, Debussy, and, of course, Schubert, you will note that the majority are slow, meditative, contemplative. Virtuosity is not an essential part of the equation in the lied genre, at least not in the sense of rapid vocal coloraturas or thundering piano passages. The song automatically comes with a text included, and this opens up another world entirely. This has musical implications as well. In Schubert’s case, a great poem whose verses convey a striking message is provided with a magnificently sensual musical frame that allows the text to exude a powerful influence on the listener. ''Wandering”, or, better yet, “strolling” through nature is part of the very essence of the Romantic poet, with all his loneliness and longing. He contemplates nature, he listens to the silence, he describes inner emotional states. “Wandering” could also imply a sort of movement, but in Schubert’s lieder we are actually dealing with an individual subject who is moving, “wandering” through the time allotted to him on this earth. We are confronted with a series of snapshots, doubts, and fears. Whenever Schubert depicts the inner emotional state of the soul, he is always honest and truthful..."

Born in the Ladin town of La Val (South Tyrol, Italy), baritone Andrè Schuen studied at Salzburg Mozarteum University with Horiana Branisteanu and Wolfgang Holzmair, while also actively participating in masterclasses imparted by Kurt Widmer, Sir Thomas Allen, Brigitte Fassbaender, Romualdo Savastano, and Olaf Bär. In 2010, at the Mozarteum, he obtained his diploma in opera, Lied and oratorio with distinction, and was awarded the Hanna Ludwig Prize and the Lilli Lehmann Medal.

After already having gathered first experiences at the Salzburg Festival in 2006, he has been regularly invited to appear in Salzburg Festival productions since 2009, collaborating with conductors Ingo Metzmacher, Riccardo Muti, and Ivor Bolton – most recently in the role of Moralès in Carmen with Sir Simon Rattle as conductor. From 2010 to 2014 he was a member of the ensemble of soloists at Graz Opera, where he covered roles including Prince Yeletzky (Queen of Spades), Belcore (L‘elisir d‘amore), Ford (Falstaff), Papageno (Magic Flute), Heerrufer (Lohengrin), and Roi Alphonse (La favorite). At the Theater an der Wien (Vienna) he was invited to perform under the baton of Nikolaus Harnoncourt in the title roles of Don Giovanni and Nozze di Figaro, as well as in the role of Guglielmo in Così fan tutte; he has likewise sung Don Giovanni in Perm (Russia) with Teodor Currentzis conducting. The Theater an der Wien has invited him back for further role débuts including the title role in the world première of Anno Schreier’s Hamlet and the Count in Richard Strauss’s Capriccio; he also covered Marcello in La Bohème for the Grand Théâtre de Genève. In parallel, Andrè Schuen pursues a widespread career on concert podiums, collaborating with conductors such as Daniel Harding, Philippe Herreweghe, Riccardo Muti, Jukka-Pekka Saraste, Paavo Järvi, and Trevor Pinnock. He is particularly fond of Lied repertoire, which he prepares and performs with his duo partner Daniel Heide; particularly the great Schubert and Schumann cycles, along with individual songs and entire cycles from the most diverse periods of music history, a wide selection that he is constantly enlarging. In 2015, Andrè Schuen’s first solo CD was released by CAvi-music, and the same label published his recording of Beethoven lieder with the Boulanger Trio in 2017.

Born in Weimar, pianist Daniel Heide is one of the most sought-after vocal accompanists and chamber musicians of his generation. He performs in recital series and festivals all over Europe as well as in Asia: for instance, in the Konzerthäuser in Vienna, Berlin and Dortmund, the London Wigmore Hall, the Schubertiade in Schwarzenberg and Hohenems (Austria), the Heidelberg Spring Festival, and the Oxford Lieder Festival.

He also loves sharing the stage with actors and narrators including Christian Brückner, Udo Samel, Thomas Thieme, and Hanns Zischler in the genre of melodrama Daniel Heide had a close collaboration with the late German-Greek mezzo-soprano Stella Doufexis. Their CD Poèmes with songs by Claude Debussy was awarded the German Record Critics’ Prize. As a chamber music partner in duo sonata recitals he has concertized with outstanding soloists including Sabine Meyer, Tabea Zimmermann, Antje Weithaas, Wolfgang Emanuel Schmidt, Jens Peter Maintz, and Danjulo Ishizaka.

Daniel Heide is the founder and artistic director of the vocal recital series Der lyrische Salon. Held in Ettersburg Castle near Weimar, the series has existed since 2011 and is one of the few – anywhere in the world – that is devoted exclusively to artsong. In that context he has collaborated with a great number of celebrated soloists of the lied genre in over 50 recitals.