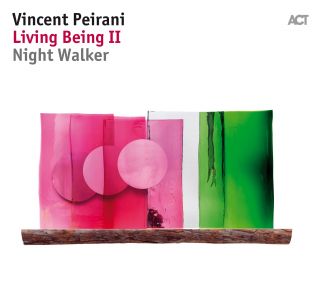 Recorded in just four days, this album shows the quintet channelling its energies even more powerfully and consistently. The mix by sound engineer Boris Darley took several months of experimentation to get it right. As Peirani says,“it was like being in a musical laboratory.”
Whether seen from a jazz or a pop perspective, the combination of instruments is unique. “This album is more of a collective trip,” he explains. “The accordion is even less at the centre. It is only if you were to remove it that you would realize quite how much has suddenly gone missing.” The art of Peirani is to play rhythmically and at the service of the tune, adding layers to each piece, as others could only attempt with a vast array of keyboards. The melancholy of chanson, the elegance of classical music, the sheer power of rock – his virtuosity pulls them all together.

Living Being take a kid-glove approach as they start off the album; they play Sonny Bono’s “Bang Bang” with the tenderest possible feel, giving this cover a completely new lightness. On “Enzo”, which starts with mellifluous charm, Peirani plays the accordina. His powerful version of the aria “What Power Art Thou” by the English composer Henry Purcell, from the 1691 opera “King Arthur”, preserves the triumphal power of the original, yet could hardly be further removed. The pivotal point of the album is the three-section “Kashmir To Heaven”, which references two songs of the legendary hard rock band Led Zeppelin. The energy levels in the band, as it carefully builds this mini-suite, are quite staggering. Living Being remains true to the vibe of the originals but with a completely different instrumentation: there isn’t a guitar in sight.

When Vincent Peirani says his band wants to be a ‘chamber rock music orchestra’, it may sound like “Rock meets Classic” bombast. But Living Being, this powerful beast of a jazz band, is exactly the opposite. It is a supple little animal that moves elegantly on any terrain without ever leaving the path, but can grow into a muscular carnivore at any time.

"What this Nice-born Parisian teases out of his accordion is something the likes of which world has never heard before. The great French accordion tradition, from Galliano to Matinier, shines through, but he takes it further with a new, characteristic expressiveness. It is a future virtuoso that is playing here!" says the Süddeutsche Zeitung newspaper.

The French accordionist, vocalist and composer Vincent Peirani was born in Nice on 24.4.1980.He started playing the accordion at the age of eleven. One year later he began taking lessons in classical music for clarinet and accordion at the "Conservatoire National de Région" in Nice, and it didn't take long for his gift to start showing.

Between 1994 and 1998, as a teenager, he won numerous international awards and competitions for classical accordion, including the Klingenthaler Accordion Competition (Germany), the award of the accordion festival in Castelfidardo (Italy), the "Trophée Mondial at Cassino" (Italy) and the international "Reinach" accordion competition (Switzerland). The highlight of these accolades was the first place in the competition for classical accordion at the "Conservatoire National Supérieur de Musique" in Paris in 1996. These early successes quickly enabled Vincent Peirani to appear at festivals all around Europe (Bayreuth, Salzburg, Vienna, Rome, Stockholm).

At 16 he discovered jazz – in particular the music of Bill Evans and the French jazz-rock band "Sixun" – and in 2001 he began his formal studies of jazz at the "Conservatoire National Supérieur de Musique" in Paris. Initially he garnered more scepticism than anything else with his instrument, the accordion, and his classical background, but it didn't take long before he won the critics over with a whole new way of looking at the accordion, and made himself a name in France's jazz scene as well. His big breakthrough was coming first at the "La Défense Jazz Competition" in 2003. This victory opened the doors for him to work with the crème-de-la-crème of the French jazz scene. Peirani then decided to quit his jazz studies to have more time to play, and soon he was working with musicians the calibre of Michel Portal, Daniel Humair, the Renaud Garcia Fons Quintett, Sylvain Luc, Louis Sclavis and Vincent Courtois. His collaborations with especially Michel Portal and Daniel Humair persist to this day.

During this time he has also pursued many of his own projects, drawing from the most varied of genres – from jazz, chanson and world music to classic and on through to heavy rock. Among his biggest projects are the band "Mésolex", the duo with the saxophonist Vincent Lê Quang, the quintett "Living Being" and the collaboration with the French-Indonesian vocalist Serena Fisseau (project: "Sejalan"). He has recorded numerous albums with these line-ups, including "Mésolex" (2008), "Gunung Sebatu" (2009) and "EST" (2010).

Since 2011, Vincent Peirani has played regularly in a quartet fronted by the Korean vocalist Youn Sun Nah. In doing so he made the acquaintance of the Swedish guitarist Ulf Wakenius and ACT boss Siggi Loch. Peirani played on the Ulf Wakenius record "Vagabond" (ACT 9523-2), which came out in February 2012. A little later the two went on tour together as a duo, and everywhere they played, Vincent Peirani was a sensation.