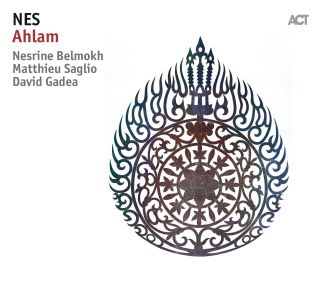 - Three languages, three instruments, three artists. One unified musical identity
- People with a liking for the genre-busting music of artists such as Anouar Brahem, Dhafer Youssef or Ibrahim Maalouf are going to love NES

NES can't be tied down to a specific location. Their music is between traditional Arabic and world music, jazz and pop. These three superb musicians originally met in Valencia in Spain. Percussionist David Gadea is from the region, and was already touring with Flamenco greats such as Ximo Tébar and Josemi Carmona; Matthieu Saglio is a French cellist “with a thousand tone colours” who has performed in more than 30 countries; the singer/cellist Nesrine Belmokh had worked with legendary conductors such as Lorin Maazel and Daniel Barenboim, and performed with Cirque du Soleil on international tours. Placido Domingo has called Nesrine “an exceptional artist, a wonderful voice.”

Russafa, the area around the station in Valencia, Spain, is famous for its market, which offers every imaginable Mediterranean delicacy. This was once a working-class district, but is now full of eccentric cafés and hip restaurants. "Russafa is a place full of light and colours," explains Nesrine Belmokh. "It's the perfect meeting place for everything Mediterranean!" It also proved to be a meeting place that would shape the singer/cellist's future as a musician, because it was there that she met the percussionist David Gadea in 2015. "David and I went to a solo concert by a cellist, Matthieu Saglio. When we talked afterwards, we found out that for seven years we had both lived in Russafa without knowing each other - only 200 metres apart!"

The three became friends, created a trio, built a repertoire and chose a name: NES, Nesrine's nickname. The acoustic music on her debut album "Ahlam", mainly recorded live, draws strong inspiration from pop and flamenco, as well as from the sounds Nesrine heard in her parents' house, which was frequented by Arabic musicians from the Mediterranean region.

“Arab-Andalusian music is more or less the classical music of North Africa, and it left its mark on me," explains Nesrine. "It was also the starting point for my artistic career – that all got going when I sang and played mandolin in an Arab-Andalusian band. Later on I embarked on classical cello studies, but I always knew I wanted to be a singer."

"Ahlam" means "dream" in Arabic. The long-held wish of the three NES musicians was to make an internationally released album - a dream which has now quite literally come true. The title song also expresses a personal dream of love fulfilled, and of the desire for peace in the world: "There is no beauty without a concept of goodness." (That sentence is a free translation of the title song's refrain.) All the Arabic lyrics on the album "Ahlam" were written by Nesrine's mother, a poet whose main occupation is as a doctor. "We’re in touch all the time," explains the singer. "An intergenerational connection like this needs constant feeding and watering!"

Nesrine sings in English, French and Arabic. She can be soft and hypnotic – as in "Bye Bye", chanson-esque – in "Le Temps" or sing pop songs such as "The World is Blue" in a duet with herself. "Music is my exorcism" is the motto of "Bye Bye" – music to drive out the demons. And the lyric: “Spending days and years looking for my identity/ I guess I have to find it within a community" – suggests that this trio itself might well represent the community she is referring to. The astonishingly varied sounds of the classically trained cellist Matthieu Saglio – who also works with loop pedals, and the sometimes fiery, sometimes very delicate percussion by David Gadea constitute the virtuoso flamenco/jazz basis of this band.

Three international musicians who joined their talents while living by the Mediterranean sea in Valencia, Spain. Nesrine Belmokh, a French-Algerian singer/cellist who had worked with legendary conductors such as Lorin Maazel and Daniel Barenboim, and performed with Cirque du Soleil on international tours, Matthieu Saglio, a French cellist ‘with a thousand tone colours’ who has performed in more than 30 countries and David Gadea, a Spanish well rounded percussionist who was already touring with Flamenco and Jazz greats, personify the essence of NES. Their sound has been shaped by the richness and background of their lives and musical experiences, ranging from jazz to classical, soul and Arabic traditional music.

Their first album, Ahlam, recorded and mixed at the renown French studio La Buissonne, contains songs in english, arabic and french, full of grace and emotion and nurtured by the magic chemistry that emerges from their creative minds. The album is named after one of the songs, ‘Ahlam’, which means ‘dream’ in Arabic. It expresses a personal dream of love fulfilled and of the desire for peace in the world. “There is no beauty without a concept of goodness” (translated excerpt from the song’s chorus).

NES’s music and unique personalities have captivated audiences around the world at relevant stages such as the Festival des Suds in Arles and le Printemps des Suds in Vence (France), the Usina del Arte in Buenos Aires, Mittelfest in Italy and Círculo de Bellas Artes in Madrid, among others. In September 2018 they will premiere their album in Germany at the Berlin Philharmonic. Their upcoming European tour will include performances in France, Spain, Romania and the Netherlands.