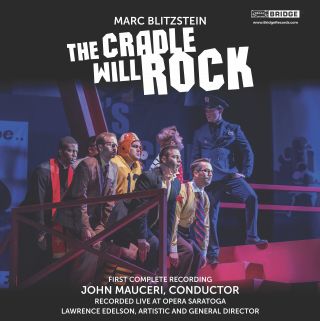 The Cradle Will Rock (Live)

Born in Philadelphia in 1905, Marc Blitzstein showed musical promise as a pianist at a young age. He began composing lieder and short piano pieces in his teens, before going on to study composition at the Curtis Institute from 1924-1926, and then briefly in Europe with Nadia Boulanger and Arnold Schoenberg. Through his involvement with the Composers Collective of New York and the New York Composers Forum-Laboratory (two groups known for their left-leaning political viewpoints), Blitzstein came in contact with the preeminent composers of the New York new music scene of the 1920s and 30s, including Aaron Copland, Henry Cowell, Hanns Eisler, and Charles Seeger. In 1939, he met and formed a close friendship with Leonard Bernstein, who became one of the most vocal proponents of Blitzstein’s music. The influence of these colleagues proved invaluable in his early development as a composer and formed the basis of many lifelong friendships within this circle of contemporaries. Throughout his life, he contributed extensively, through published writings and lectures, to the ongoing discourse over developments in American music and theater.

Blitzstein achieved his first notable success with his one-act opera Triple Sec (1928), which ran on Broadway as part of Garrick Gaities in 1930. His compositional style took on a simpler and more direct musical language in the mid-1930s, as he set aside high modernist style and turned more and more to musical theater as a means of political commentary. Most exemplary of this style, and Blitzstein’s most well-known work, is his 1937 agitprop musical The Cradle Will Rock, a pro-union political satire, which lampoons corporate greed and champions the every-man, average “Joe Worker”. Commissioned by the Federal Theatre Project, Cradle created a sensation on the night of its premiere when, hours before curtain, authorities from the FTP attempted to shut it down, citing the show’s anti-government message.

Blitzstein composed in all genres, but the theater gave him his greatest successes—Cradle; Regina, an opera for Broadway (1949); and an English adaptation of Kurt Weill and Bertolt Brecht’s The Threepenny Opera (1954)—and failures—Reuben Reuben (closed out of town, 1955) and Juno (1959). His best-known orchestral work, The Airborne Symphony, premiered under Bernstein in 1946. At the time of his unexpected and tragic death in 1964, much of his work was left unfinished and unpublished, leaving behind a legacy that has been largely overlooked in the ensuing decades.