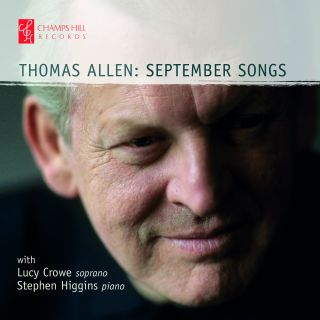 September Songs is a chance to explore songs he grew up with, loved then and loves still, but repertoire that’s not usually associated with him, the golden age of Broadway and Hollywood with its melodic beauty, lyrical inventiveness and emotional directness.

Allen has always hankered to ‘give it a go’ and to explore songs by the likes of George Gershwin, Cole Porter, Jerome Kern and Kurt Weill. This period of music has so much allure and fascination for singers and musicians from all backgrounds, and he’s upfront about the criticisms that can so often be levelled against classical singers performing the Great American Songbook – that performers don’t give it the respect it deserves: “my feeling is that these songs are every bit the equal of the standard repertoire that we sing, and one must find the way of singing them… there’s an intimacy to so many of them that, in these simple versions for voice and piano, I know I have to try to capture.” “There are one or two in particular that are little operatic scenas in themselves, and I love trying to find what that scene is – that’s my challenge.”

Sir Thomas Allen is an established star of the great opera houses of the world. At the Royal Opera House, Covent Garden, where in 2011 he celebrated the 40th anniversary of his debut with the company, he has sung over fifty roles. The same year he also celebrated the 30th anniversary of his debut at the Metropolitan Opera, New York. He returns to the Metropolitan Opera in 2017/2018 for his acclaimed portrayal of Baron Zeta (The Merry Widow). He’s particularly renowned for his Billy Budd, Pelléas, Eugene Onegin, Ulisse and Beckmesser, as well as the great Mozart roles of Count Almaviva, Don Alfonso, Papageno, Guglielmo and, of course, Don Giovanni. His recent engagements have included the title role in Gianni Schicchi for Los Angeles Opera and at the Spoleto Festival; the title role in Sweeney Todd, Beckmesser (Die Meistersinger von Nürnberg), Faninal (Der Rosenkavalier), Prosdocimo (Il turco in Italia), Music Master (Ariadne auf Naxos), Peter (Hänsel und Gretel) and Don Alfonso at the Royal Opera House, Covent Garden; Eisenstein (Die Fledermaus), Don Alfonso, Ulisse and Don Giovanni at the Bayerische Staatsoper; Faninal at the Bolshoi Theatre of Russia; Eisenstein at the Glyndebourne Festival; Don Alfonso at the Dallas Opera, the Lyric Opera of Chicago and at the Salzburg Easter and Summer festivals; Forester (The Cunning Little Vixen) at the San Francisco Opera and Beckmesser, Don Alfonso and Music Master at the Metropolitan Opera, New York.