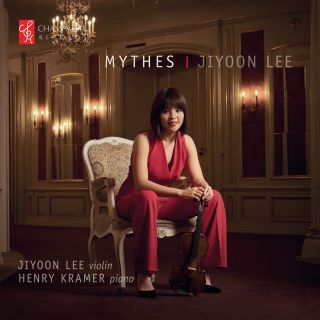 Jiyoon Lee about the album: "The “Mythes” album is all about feelings, emotions and imagination which are the most crucial elements of music-making. The entire process of recording this disc with the one and only Henry Kramer has been a pure joy, and I sincerely hope it will lead you to a journey full of adventures and fantasies."

South Korean violinist Jiyoon Lee is rapidly building an international reputation as an emerging young soloist, winning praise for her confident, communicative and soulful playing and for her natural poise as a concerto soloist. Jiyoon’s talent and endeavour in violin are decorated with numerous prizes and distinctions throughout her career. She won the David Oistrakh International Violin Competition in 2013 and was subsequently a prize winner of the Indianapolis Violin Competition in 2014 and the Queen Elisabeth Competition in 2015. In April 2016, she was awarded the first prize at the Carl Nielsen Violin Competition. Jiyoon Lee is an aspiring soloist, performing with renowned orchestras ranging from the Philharmonia Orchestra, Orchestre National de Belgique, Indianapolis Symphony Orchestra, Swedish Chamber Orchestra, Odense Symphony Orchestra, Poznan Philharmonic Orchestra, Navarra Symphony Orchestra, Orquestra de Cámara Galega, ECCO Ensemble, Seoul Philharmonic Orchestra, KBS Orchestra and Korean Symphony Orchestra and has collaborated with prestigious musicians including Nikolaj Znaider, Marin Alsop, Jac van Steen and Martin Fröst. She has performed in Berliner Philharmonie, Konzerthaus Berlin, Wigmore Hall, Tonhalle Zurich, Bozar Brussels and Bolshoy Hall. Born in 1992 in Seoul, her career as a violinist commenced at the age of four. She studied at Korean National University of Arts and with violinist Kolja Blacher at Hochschule für Musik Hanns Eisler in Berlin. At the age of only 24, she became the first concertmaster of Staatskapelle Berlin and regularly works with world renowned conductors such as Daniel Barenboim, Zubin Mehta, and Christoph von Dohnányi. Jiyoon Lee plays a violin by C. Landolfi on generous loan from the Deutsch Stiftung Musikleben in Hamburg