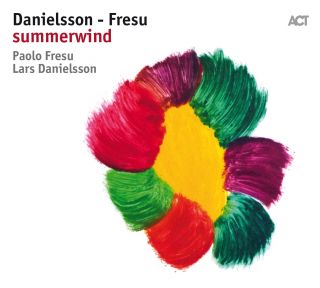 Some people talk a lot, whereas others keep hold of what is important, and only need a few words to get to their point. The same is true in music. Lars Danielsson and Paolo Fresu, who have now teamed up, are two musicians who choose the notes they play with extreme care. “Summerwind”, their first joint studio project, brings the Swedish master bassist’s gorgeous sound and his fine sense for simple and haunting melodies into a partnership with the bright, airy tones of one of Europe’s most lyrical trumpeters whose way of “playing it cool” has such distinctive expressiveness.

The duo context offers extensive space – which then needs to be filled. The decisive element for both of these musicians is not that they should play a lot, but that the focus should remain on what they play. And fewer notes are far more effective than many. That is how the poetry develops from both instrumentalists as they create a mood that is almost meditative. This is romantic, dreamy music which nevertheless has a strength coming from its very core. Danielsson and Fresu don’t just create atmosphere and colour; there is also feeling here – and depth.

“It’s about doing the right thing at the right time,” says Lars Danielsson. “That’s the challenge of playing in a duo. You can’t hide behind other instruments.” Paolo Fresu is also a master at savouring every musical moment. “I love Paolo's playing, it’s spiritual and his sound is unique. He makes me improvise in a new way,” Danielsson says.

Producer Siggi Loch had the idea of bringing these two musicians into the studio together. He has a knack for identifying musical soulmates, and this collaboration proves it again: the pair built up an almost telepathic relationship during the recording. That feeling is palpable, for example, in the piece “Dardusó”, which was created spontaneously in the studio, and in which all of Danielsson’s and Fresu’s combined trust is given over to the wisdom of the moment.

In “Summerwind”, enchanting melodies flow with an instinctive and natural grace and elegance. They develop in long arcs which bring a sense of profundity and contemplation. In a world in constant danger of overheating, Danielsson’s and Fresu’s music is a fresh and soothing breeze.

Swedish bassist, cellist, composer and arranger Lars Danielsson is well-know and admired throughout the International jazz scene for his lyrical playing and strong groove. Born in 1958, he is a musician with particularly broad interests. At the conservatory in Gothenburg he had studied classical cello, before changing to bass and to jazz. As a bassist he has a uniquely rounded sound, which is as lyrical as powerful.

The "Lars Danielsson Quartet" with former Miles Davis saxophonist David Liebman, pianist Bobo Stenson and legendary ECM drummer Jon Christensen has received a lot of recognition and numerous awards during the 18 years of its existence. Danielsson has released ten solo-albums since 1980 with his quartet and guests such as Alex Acuña and John Abercrombie. The Quartet has been a testing ground for Danielsson’s work as a composer and arranger, which has extended over the last years to include both - symphony orchestra and big band music. He has worked with Denmark’s Radio Concert Orchestra as well as the JazzBaltica Ensemble as a composer, arranger and producer.

In 2007, he received a commission for a piece with the Gothenburg Symphony Orchestrafeaturing himself as a soloist together with Leszek Moždžer. He has also received a commission from the NDR Big Band and Wolfgang Haffner to write a piece for the JazzBaltica Festival 2007. Furthermore, he has been working with the St. Petersburg Symphony Orchestra in collaboration with Vytas Sondeckis and Bugge Wesseltoft.

His 2008 album “Pasodoble” was a huge success. Jazzwise UK wrote about Danielsson’s collaboration with Polish pianist Leszek Moždžer: “A clarity of thought and execution rarely encountered in jazz.”

“Pasodoble” was followed by another collaboration with Leszek Moždžer on the 2009 album “Tarantella”. Once more the album caused enthusiastic reactions by Jazzwise: “Easily Danielsson’s finest album to date, it also numbers among the finest albums in the ACT catalogue.”