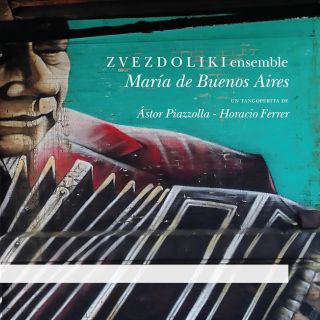 Catalog number: AR 009
Releasedate: 05-10-18
- A live recording, performed in the studio, with a live audience.
- El Duende is played by a female singer.
- It's a quite raw & authentic version of the tango-operita
- An ensemble of 14 musicians/singers, without a conductor
- Double album for the price of 1

Follow Z V E Z D O L I K I ensemble into the abdomen of Buenos Aires, and meet ill-omened María, born with a curse in her voice on a day when God was drunk. Seduced by tango, she is murdered, but her soul continues to roam the streets of Buenos Aires. Anti-clerical, blasphemous, potentially provocative and certainly scandalous, María de Buenos Aires (1968) is a forgotten “tangoperita” by Ástor Piazzolla and Horacio Ferrer which translates the themes of seduction and fatality in traditional and nuevo tango, culminating in a hymn to (supernatural) deviance, lust, but also religiosity.

Z V E Z D O L I K I  is named after stravinsky's cantata (1912) for orchestra and male chorus on a text by russian symbolist poet konstantin balmont and that was dedicated to debussy. it was premiered in brussels in 1939 in the ' Institut Nationale de Radio-diffusion Belge ' conducted by franz andré.

in 2013, Z V E Z D O L I K I organised 'noot voor nood', a major charity project for the homeless in antwerp, which had a very successful second edition in 2016, with a performance of piazzolla's tango-operita 'marìa de buenos aires' in the magnificent bourlaschouwburg., with support of antwerp district.