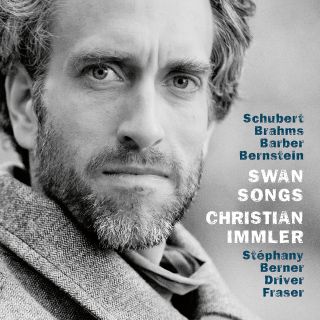 SWAN SONGS (Schwanengesänge)
“What remains? And to what extent are composers, when they compose, aware of how urgent that question is? In my opinion, these are the main themes that confront us in a “swan song” (a composer’s last work – or, as in the case of our recording, the last opus in his vocal output). In the second part of Schwanengesang – in the songs based on poems by Heine --- Schubert attains an unprecedented economy – or rather concentration – of means: the demands thereby made on the performer are literally “unheard of”. The text and the music express themselves so directly that the listener can find no refuge in musical solace.

Brahms’s Vier ernste Gesänge, written in 1896, one year prior to his death, paint an entirely different picture. I find that they reveal his inner struggle for personal truthfulness, his hope to attain an all-subliming love after so many years of painstaking sacrifice, while somehow managing to retain a certain kind of faith. To his friends he admitted that he thought he had composed “entirely godless songs” in Op. 121, although their texts “thank God, can be found in the Bible”.

His audience wanted to hear “religious songs”. That is what they seem to be on the surface, and the agnostic composer’s admirers have been ever since supposing that Brahms had waxed religious.

Samuel Barber’s last vocal work, the Three Songs Op. 45, has fascinated me ever since my student years, because of the songs’ multi-facetted style, their refined text and the music’s melancholy, morbid beauty. The second song, A Green Lowland of Pianos – the “funny one”, as Barber put it – elegantly whisks us off into an entirely different universe, a surreal décor in which it seems entirely natural that black pianos to listen every evening to frogs!

As ambiguous as life itself, and undoubtedly as scintillating and multi-facetted as Leonard Bernstein’s own personality: that is how his swan song, Arias and Barcarolles, presents itself. This musical potpourri of daily-life situations acted out by singers (usually based on the composer’s own poems) makes an explosive Broadway entrance in the first song.”

From the Tölzer Knabenchor as a boy alto soloist to singing as a baritone at major concert halls, festivals and opera houses, German baritone Christian Immler has spent many years making and recording music of the highest quality all around the world.

On stage he appeared at Opéra Comique Paris, at the Grand Théâtre Genève, at New Israeli Opera and at the Boston Early Music Festival. A keen recitalist, Christian has been invited to perform at the Wigmore Hall, the Frick Collection in New York, the Paris Philharmonie, the Salzburg Mozarteum and the Tonhalle Zurich, the latter with pianist Helmut Deutsch with whom he released the album entitled Modern Times.

His more than 50 recordings have been awarded prizes such as the Echo Klassik, the Preis der Deutschen Schallplattenkritik, several Diapason d’Or, Diamant d’Opéra, France Musiques’ Enregistrement de l’année and a 2016 Grammy Nomination. Much in demand for worldwide masterclasses, Christian is Professor of Voice at the Kalaidos Fachhochschule in Zurich.

Anglo-French mezzo-soprano Anna Stéphany was born in the North East of England, and studied at the Guildhall School of Music and Drama in London. In 2018 Anna made her debut solo recording alongside the Labyrinth Ensemble on Alpha Classics featuring works by Luciano Berio, Falla and
Ravel. She was a member of the ensemble at Zürich Opera House between 2012-15 where she made her debut in rols of operas by Mozart, Offenbach, Verdi, Monteverdi and many more.

Silvia Fraser has appeared in concert with Renaud Capuçon und Françoise Pollet, worked closely with Pierre Amoyal and has had numerous media appearances, including BBC television and radio. She appeared internationally including New York, Vienna, Paris and London‘s Royal Festival Halland Wigmore Hall; The New York Times described her recital together with Christian Immler as „a harmonious conversation between pianist and baritone“.
Laureate of the 1st International Swedish Duo Competition, recipient of a prestigious Wingate Scholarship and the Goodhew Scott Junior Fellow at the Royal College of Music, Silvia has long been interested in the duo repertoire and is co-artistic director of Rencontres Musicales Lémaniques together with
violinist Yuuki Wong. Having been pianist and coach at the world-renowned Chetham’s School of Music, she is now the official pianist for Renaud Capuçon’s class at HEMU Lausanne.