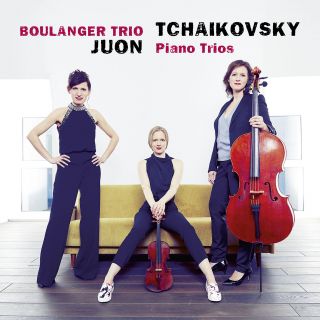 - The Boulanger Trio counts as one of the leading and established Piano Trio formation in Europe
- The Russian composer Paul Juon, born into a family of half Scottishmother and an immigrated Swiss father from Grison emigrated backto Switzerland, wrote the Litaniae Op. 70 which creates new sound colours in the tradition of Tchaikovsky
- Tchaikovsky’s Piano Trio counts as one of the late Romantic master pieces, which the composer worked within a very short time to mourn about his friend and teacher Anton Rubinstein who died 1881.

“In Juon’s piano trio”, as the members of the Boulanger Trio find, “we plunge into the most profound recesses of the soul. Everything acquires existential significance. This work truly captivates us: so much occurs within such brief moments”. This is where our performers find a bridge that connects Juon’s kaleidoscopic tone poem with PETER TCHAIKOVSKY’s colossal Piano Trio, op. 50, a musical epitaph for pianist and conductor Nikolai Rubinstein, who had been Tchaikovsky’s friend and mentor.

Rubinstein had ensured that the young Tchaikovsky was allowed to enter the newly founded Moscow Conservatory while taking him up as a resident in his own home. “He looked after my every need like a child’s nurse”, Tchaikovsky wrote to his family in Saint Petersburg. Rubinstein not only made sure
that Tchaikovsky wore appropriately elegant clothing, but he took him to the opera and to concerts while introducing him to his circle of colleagues and friends, playing out his connections to draw their attention to his protégé’s compositions.

His unexpected passing in 1881, when he was only 45, must have profoundly shattered the young Tchaikovsky, who dedicated the only piano trio he ever
wrote to his late friend, adding the subtitle À la mémoire d’un grand artiste.

The work consists of only two monumental, thematically related movements. Beginning with a heartfelt cello cantilena, the first one is an extensive elegy or Pezzo elegiaco: an immense variety of musical ideas flow together in this sonata form with exposition, development, and reprise. The second movement consists in a seemingly endless set of variations. According to his friend Nikolai Kashkin, Tchaikovsky wanted to “paint a musical portrait of Rubinstein in different phases of his life”.

Whether that be true or not, this is indeed a musical broadsheet of illustrated character variations. Particular mention can be made of the third variation, a brilliant piano caprice, the fifth, where the piano imitates bell chimes, the sixth in form of a waltz, and the elaborate fugue in the eighth. The twelfth variation-cum-finale sets in powerfully and energetically, but harks back to the first movement by concluding with a poignant funeral march.

Chief Vienna music critic Eduard Hanslick found that Tchaikovsky’s trio, despite “a number of original traits and successful turns of phrase”, belonged to the kind of “quasi-suicidal compositions that destroy their own effect because of their merciless length”. Today, however, it is regarded as one of
the milestones in the genre of chamber music with piano.

In 2006, Karla Haltenwanger, Birgit Erz and Ilona Kindt fulfilled the dream of devoting their lives to chamber music when they founded the Boulanger Trio. Twelve years afterwards, the three musicians still find that it is a privilege to be able to practice and study the abundant, variegated repertoire of chamber music on a daily basis. Based in Hamburg and Berlin, the trio still plays in its original lineup; in the past years, it has gained an excellent reputation in the world of chamber music. The German newspaper Die Welt described a performance of the Boulanger Trio as “irresistible”, and composer Wolfgang Rihm wrote in a letter: “To be interpreted in this way is surely the great dream of every composer”.

The ensemble has performed at the Vienna Musikverein, the Elbphilharmonie in Hamburg, the Festspielhaus in Baden-Baden, and London’s Wigmore Hall. They have also been invited to festivals including the Heidelberg Spring Festival, the Kissingen Summer Festival, and the Dialoge Festival in Salzburg. Their début performance at the Berlin Philharmonie took place in 2009 with Beethoven’s Triple Concerto along with the Berliner Symphoniker. Ever since then, orchestras such as the Niederrheinische Sinfoniker, the Brandenburger Symphoniker, and the Berne Symphony Orchestra have
regularly invited the Boulanger Trio to perform concertos with them. In addition to works of the Classical and Romantic period, the commitment to contemporary music is an important focus within the trio’s repertoire. The ensemble is collaborating with some of today’s foremost composers including Beat Furrer, Wolfgang Rihm, Johannes Maria Staud, and Friedrich Cerha. In 2012, the trio launched its own concert series, the Boulangerie, which is now held on a regular basis in the cities of Hamburg, Berlin, and Vienna.

The Boulanger Trio can already look back on an impressive, wide-ranging discography of eight CDs, each one featuring a special programmatic concept.
The ensemble is named after the sisters Nadia and Lili Boulanger, whose exceptional personalities and uncompromising devotion to music continue to be a great source of inspiration to the trio.