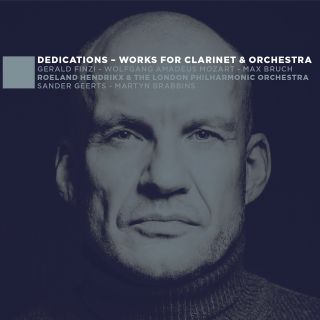 Catalog number: EPRC 0026
Releasedate: 05-10-18
- Works for clarinet and orchestra of Mozart, Finzi and Bruch with the London Philharmonic Orchestra, conducted by Martyn Brabbins, in the famous Henry Wood Hall in London.

- Roeland Hendrikx was able to get personal notes by Finzi concerning his concerto.

- Also, it's not often that work of the (English) composer Finzi is recorded by an English orchestra and English conductor.


More than any other instrument, the clarinet is a medium for personal dedication to specific virtuosi. Mozart created his clarinet concerto for Anton Stadler, while Max Bruch dedicated his (double) concerto to his son Max Felix. Belgian virtuoso Roeland Hendrikx also plays Gerald Finzi’s clarinet concerto, to which he has front row access via his teacher Thea King, doyenne of British clarinettists and spouse of Frederick Thurston, who premiered the Finzi concerto in 1949. Teaming up with the London Philharmonic Orchestra, Hendrikx pays homage to a genre – the clarinet(tist) concerto –, its gems, and its genius performers.

Roeland Hendrikx is one of the leading clarinetists in Belgium.

​Roeland is teaching clarinet at the Maastricht Conservatory (The Netherlands) and the LUCA School of Arts in Leuven (Belgium). He has given masterclasses in Europe, China, Japan, and the US.  For years (1998-2017), he has been clarinet soloist at the Belgian National Orchestra and La Monnaie, the National Opera of Belgium.

The London Philharmonic Orchestra is one of the world's finest symphony orchestras, balancing a long and distinguished history with a reputation as one of the UK's most adventurous and forward-looking orchestras.

As well as giving classical concerts and opera performances in the UK and internationally, we also record film and video game soundtracks, have our own record label, and reach thousands of people every year through activities for schools and our local communities.

The Orchestra was founded by Sir Thomas Beecham in 1932, and since then has been headed by many of the great names in the conducting world, including Sir Adrian Boult, Bernard Haitink, Sir Georg Solti, Klaus Tennstedt and Kurt Masur. The Orchestra's current Principal Conductor is Vladimir Jurowski, appointed in 2007. Andrés Orozco-Estrada became our Principal Guest Conductor in 2015.