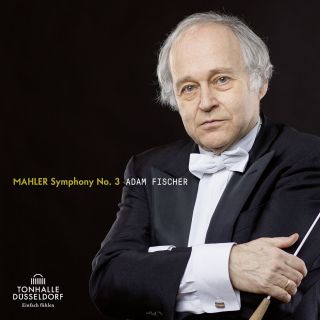 - The current Mahler Cycle in progress with the Düsseldorf Symphonic and his artistic Director Adam Fischer develops to a bestseller in the crowded Mahler recording market.

- After the symphonies Nos. 1, 4, 5 and 7 now there is one of the bigger Symphonies in arrival.

- The Swedish mezzo soprano Anna Larsson has a great reputation as THE Mahler interpreter of these days with her warm, strong and mellow mezzo voice.

Reflections on the 3rd Symphony By Adam Fischer
Mahler’s entire output seems like one long farewell to me: it is as if he was bidding farewell to the past and likewise to the future, since he had a great fear of death. At the end of his symphonies we often encounter utopias, as here in the Adagio of the Third, and many years later, particularly, in the Ninth.

Something new sets in, but the movement is still a closure. From it we learn that whatever is new will no longer occur in this world. The Third Symphony, on the whole, is one of Mahler’s richest: the individual movements are so different from one another that they almost seem to stem from different periods of Mahler’s life. The Third contains its own world in itself – already in the first movement, longer than most Beethoven symphonies.

Then Mahler plunges into the Wunderhorn world: the world of simplicity, where his style seems inspired by Schubert. He quotes from his own works and creates his own mythology. Just as in a grand novel, the same figures appear in different stories. The second and third movements belong together; then, a new dimension is introduced in the fourth one with the human voice. With the contralto’s first note, Mahler truly opens up a new world. This is a new kind of composition altogether. The measures almost seem to flow into one another; Mahler is freeing himself from the rigors of rhythmic bars. In the score we find corresponding instructions: “In flowing movement, without paying heed to meter”, and: “Conduct the underlying rhythm”. In the latter passage, one would normally have to conduct a rhythm of seven against four: here it is difficult to do so exactly.

The result is a dilemma: the musicians expect a precise gesture – and certain conductors indeed subdivide the rhythm as indicated by Mahler. But I find it preferable to adopt the metric scheme as a mere framework. Played exactly, the passage loses its artistic meaning: liberation from chains. This abandonment of the rigorous diktat of meter represents a challenge for every conductor. (Excerpt of the Adam Fischer’s remarks)

Anna Larsson obtained her music diploma at the University College of Opera in Stockholm, her home town. In 1992 she met the British breathing and vocal coach Anna Sims, with whom she continues to work until today. Anna Larsson sang her opera début in 1996 in Carl Unander-Scharin‘s Tokfursten/
The King of Fools at Vadstena Castle. She went on to draw major international attention in her performance of Mahler’s Resurrection Symphony (No. 2) with the Berlin Philharmonic and Claudio Abbado in 1997.

With her rich, velvety, flowing voice, Anna Larson has made herself a worldwide reputation in the role of Erda in Wagner’s Ring cycle, with performances in the opera houses of Berlin, Vienna, Salzburg, Aix-en-Provence, and Milan. She has also covered the roles of Waltraute, Orphée, Fricka, Dalilah and Zia Principessa in venues such as Stockholm Royal Opera, Bavarian State Opera (Munich), the Palau des Arts (Valencia), and Finnish National Opera, along with the festivals in Salzburg and Aix-en-Provence, collaborating with conductors including Daniel Barenboim, Zubin Mehta, Christoph von Dohnányi, and Kent Nagano. In January 2011 she sang her début as Kundry (Parsifal) at the Théâtre de La Monnaie in Brussels.

As a concert vocalist she has collaborated with some of the world’s greatest orchestras, including the Berlin, Vienna, New York and Los Angeles
Philharmonics, the Chicago Symphony, the LSO, and the LPO. Anna Larson masters practically all the classical repertoire for contralto and orchestra,
and has especially made herself a name as an interpreter of Mahler. She also loves to sing Lieder, going regularly tour with internationally renowned pianists in vocal programmes featuring a wide range of German, British and Scandinavian art song repertoire.

In 2010, King Carl XVI Gustaf of Sweden conferred Anna Larsson the title of Royal Court Singer. In 2011, she inaugurated her own concert hall: the Vattnäs Concert Barn in the village of Vattnäs near Mora in the Swedish province of Dalarna.

At the beginning of the 2015/16 season, Adam Fischer was appointed Principal Conductor of the Düsseldorfer Symphoniker and Artistic Consultant of the Düsseldorf Tonhalle. He is also Honorary Conductor of the Austrian-Hungarian Haydn Orchestra, founder of the Eisenstadt Haydn Festival, and founder and director of the Wagner Festival in Budapest. Well-known for his courageous political commitment, Adam Fischer has spoken out often in favor of human rights. Together with András Schiff he initiated and signed a petition against racism and discrimination, which they submitted to the European Union.

Born in 1949 in Budapest, Adam Fischer studied composition and conducting in the Hungarian capital, and with professor Hans Swarowsky in Vienna.
After appointments as Kapellmeister in Helsinki, in Karlsruhe and at Munich State Opera, Fischer held the post of General Music Director successively at the opera houses of Freiburg, Kassel and Mannheim, and was also Music Director of Hungarian State Opera in Budapest. Since 1999 he has been Chief Conductor of the Danish National Chamber Orchestra in Copenhagen.

Regular engagements have led Adam Fischer to perform in the great opera houses of Europe and the US, including Vienna, Milan, Munich, Covent
Garden, the New York Met and Bayreuth Festival. In orchestra appearances he also conducts the Vienna Philharmonic, the Vienna Symphony, the Munich Philharmonic, the Orchestre de Paris, the London Philharmonic (LPO), the Orchestra of the Age of Enlightenment, the Chicago and Boston Symphonies and the NHK Symphony in Tokyo. Fischer’s award-winning CD releases include the complete symphonic works of Haydn (distinguished
with the German national prize “Echo Klassik”) as well as of Mozart. He has also been awarded the Grand Prix du Disque twice: for his recordings of Die Königin von Saba (Goldmark) and of Bluebeard’s Castle (Bartók). In 2017, Adam Fischer was named Honorary Member of Vienna State Opera.

“An orchestra for Düsseldorf ”: that is the objective and the high standard that the Düsseldorfer Symphoniker set for themselves – 250 times a year. This orchestra has an uncommon profile, since it performs not only in the Tonhalle, but also for the Deutsche Oper am Rhein in Düsseldorf and in Duisburg. On its regular tours to Holland, Austria, China and Japan, the orchestra carries Düsseldorf ’s reputation as a city of culture out into the world.

Already in the 1700’s, internationally celebrated artists such as Handel and Corelli collaborated on occasion with the “Düsseldorf Court Orchestra” until the court was dissolved. A century later, in 1818, orchestral culture was re-introduced into Düsseldorf when the Municipal Music Society (Städtischer Musikverein) was founded, attracting celebrated musicians of the likes of Mendelssohn and Schumann to serve as conductors. The orchestra became truly “municipal” in 1864, and after Aachen it is thus the second oldest civic orchestra in Germany. Throughout the following decades it became one of the leading and largest orchestras in the country.

Its conductors in the postwar era have been Heinrich Hollreiser, Eugen Szenkar, Jean Martinon, Rafael Frühbeck de Burgos, Henryk Czyz, Willem van Otterloo, Bernhard Klee, David Shallon, Salvador Mas Conde, John Fiore and Andrey Boreyko. Starting in the 2015 season, Adam Fischer has taken up the post of Principal Conductor. The orchestra went on tour to Spain in 2011, guested at the Beethoven Easter Festival in Warsaw in 2012, and enjoyed resounding success in Moscow that same year.

In 2014, the Düsseldorfer Symphoniker gave a superb début performance at the Musikverein in Vienna, and were likewise well-received at the Concertgebouw in Amsterdam. In May 2015 they made nine acclaimed appearances in Tokyo. In 2017 the orchestra was invited to open the new concert hall in Arnheim, guested in Moscow and played again at the Concertgebouw in Amsterdam.

The Düsseldorf Municipal Music Society (Städtischer Musikverein) is celebrating its 200th birthday in the 2017/2018 season. A performance in Düsseldorf of Haydn’s oratorio The Creation in 1818 marked the beginning of the Düsseldorf Music Festival, directed alternatively by Johannes Schornstein
(Düsseldorf) and Friedrich August Burgmüller (Wuppertal).

In 1833, Felix Mendelssohn directed the 15th Düsseldorf Music Festival when he was only 24 years old. Later on, the Municipal Music Society appointed Robert Schumann as Festival Director for the years 1850 to 1854. In 1864, the orchestra musicians acquired the status of municipal employees; they chose the name “Düsseldorfer Symphoniker” for themselves in 1960. In the course of two centuries, the 90 women and 40 men who make up the Musikverein choir have continued to uphold the venerable tradition of a lay choir singing on a professional level. For instance, the choir members of the Musikverein stood already on the podium of the Alte Tonhalle for the Düsseldorf premiere of Mahler’s 3rd Symphony in 1928 under the baton of Municipal Music Director Hans Weisbach.

Marieddy Rossetto has been Chief Conductor of the Städtischer Musikverein choir since 2001. Born in São Paulo, she studied piano at Santos Conservatory and Brasilia University before going on to study orchestral and choir conducting at Cologne Musikhochschule. Her artistic career began in Brazil and continued in Wuppertal before she came to Düsseldorf. Marieddy Rossetto is committed to music education through SingPause, an initiative in local music schools.

The members of the Clara Schumann Youth Choir are ages ten to seventeen. Many of them have been singing since the age of six, in progressive training offered at the Clara Schumann Music School in Düsseldorf; the Youth Choir is reserved to pupils who are close to graduation. Choir director Justine Wanat ensures that the choir members’ education includes not only basic musical knowledge, but comprehensive vocal training as well. The choir presents its remarkable results to the public at large on a regular basis. In 2010 it won First Prize at the Mercedes Benz Choir Competition; in 2014 it
won Second Prize at the International Children’s and Youth Choir Competition in Paris.

Justine Wanat studied at Katowice Conservatory, where she obtained her Master’s Degree with honors in choir conducting and musical education in 1986. In 1998 she was appointed as choir director at the Clara Schumann Music School in Düsseldorf.