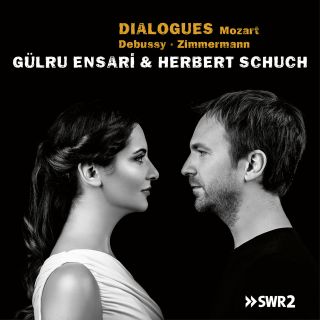 - The highlight and focus of that album is the Monolues (Monole) by Bernd Alois Zimmermann, a famous and important German composer of the last centuary, who would have turned 100 in 2018.

- The Mozart and Debussy pieces are pieces of which Zimmermann quote excerpts within his Monologues.

- The second Duo CD by the German-Turkish artists Gülru Ensarí and Herbert Schuch, who on his own is already well known as a soloist. (GO EAST! CAvi8553376)

Bernd Alois Zimmermann (1918-1970) is quoting Mozart and Debussy and others in his Monologues. This project album is trying to follow the ruts of Zimmermann, celebrating his 100th birthday.

“As students we had already been allowed to take a peek inside the Monologues, but we only had access to a couple of photocopied pages. When the 100-year-celebration of Zimmermann’s birth came around, we remembered the impression they had made upon us. When we finally got to see the entire score, however, we took a deep breath: it demands the most incredible acrobatic feats!

From the very beginning, we were particularly charmed by the way Zimmermann cites other composers: the quoted passages rise up in the midst of an agitated storm, like islands of tranquility and beauty. The works quoted by Zimmermann are not for piano duo, but we find that they have certain parallels with the other pieces on this recording.

The cocky, unpredictable, whimsical aspect of Mozart’s C Major Sonata is also present in Zimmermann. It is fascinating to note how he quotes Debussy’s prelude Feux d’artifice (Fireworks) in the 4th and 5th Monologues, thereby transplanting that shimmering French flair into his own musical environment.

Debussy, for Zimmermann, is more than just a source for quotes. The frothy, pastel sonorities in the Monologues are so untypically German, so much more beautifully poetical than anywhere else, except in Debussy. Etc.” (excerpt from an interview printed in the booklet)

Gülru Ensari & Herbert Schuch, Piano Duo
“In terms of agogics, expression, articulation and phrasing, they play as if with one voice. Here we have a truly fabulous piano duo” PianoNews, 3/2017

Whether in piano four hands or on two pianos, the German-Turkish piano duo Gülru Ensari & Herbert Schuch has scored triumphs with audiences and critics in the three years since its inception at a multitude of outstanding international venues: BOZAR (Brussels), Philharmonie (Cologne), as well as in Munich, Salzburg, Luxemburg, Frankfurt, at the MiTo Festival in Milan and Turin, at the Bad Kissingen Summer Festival, at the Istanbul Music Festival, and in a number of appearances with the WDR Symphony Orchestra (Cologne) and the Hessian State Orchestra Wiesbaden.

In the 2018/19 season they will be performing at the Berlin Konzerthaus, at the Schumannfest in Düsseldorf, in Würzburg, Fulda, and Blaibach, and once again with the WDR Symphony Orchestra at the Cologne Philharmonie.

To critical acclaim, the duo released their first CD on the CAvi-music label in early 2017, centered on Stravinsky’s wild and “scandalous” ballet music Le Sacre du Printemps, in conjunction with waltzes by Hindemith and Brahms, and rounding off the programme with the world première recording of two Anatolian folk songs by Turkish composer Özkan Manav. Involved as they are in an interplay between East and West, those two pieces also tell the duo’s private story: Herbert Schuch and Gülru Ensari married in the summer of 2014 in Istanbul and have been living for several years in Cologne, the city they have chosen to call their home.