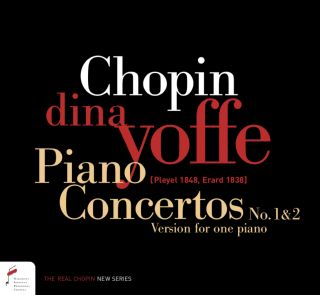 Chopin. Piano Concertos No. 1&2, Version for one piano

Catalog number: NIFCCD 034
Releasedate:
to be filled in by Mario

Previous releases have been highly rated by international critics. Albums from the series, in turn, have scored considerable success on the international recording market and won multiple awards, including the Diapason d’Or.

Dina Yoffe Top price-winner at the Schumann international competition in Germany and prestigious Chopin Competition in Warsaw, Poland. Participant at international music festivals in Europe, Japan, U.S.A. Honorary member of Japan Piano Teachers Association Artistic Director of Festival and Master Classes ‘Musical Summer’ in Malaga (Spain). Originally from Riga (Latvia), Dina Yoffe started her musical education at the distinguished Emil Darzin’s Special School of Music in her home town and continued at the Central Music School in Moscow. Graduated from the Tchaikovsky Conservatory of Music in Moscow under the tutelage of Prof. Vera Gornostaeva, one of the most important proponents of the legendary Heinrich Neuhaus school. The concert activities of Dina Yoffe are well known throughout many countries in Europa and also in Russia, Israel, Japan, USA.