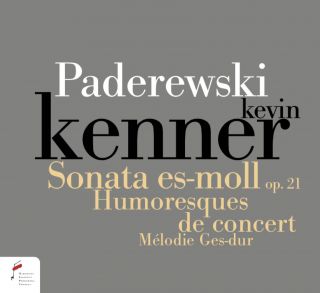 Catalog number: NIFCCD 057
Releasedate:
- First volume in a new series by Chopin Institute
- It's called Resonance and it concerns the music influenced by Chopin, where you can hear his legacy 'resonating'.
- The first volume is devoted to the music of Ignacy Paderewski, one of Chopin's most significant follow-up.

The Fryderyk Chopin Institute’s new recording series has been given the name ‘Resonance’. Figuratively, this word means a reaction to something, a response, a reverberation, an echo…

The music we present in this series is a response, a more or less obvious reaction to the music of Fryderyk Chopin. We find a clear trace of Chopin’s legacy in the music of Ignacy Jan Paderewski, and it is with him, on the 100th anniversary of Poland’s regaining of independence, that we begin our new phonographic series.

The recording contains remarkable works for piano: the Sonata in E-flat minor op. 21 as well as popular miniatures in the interpretation of eminent American pianist Kevin Kenner, the winner of the 1990 Chopin Competition. The artist plays a 1925 Steinway piano that once belonged to Ignacy Jan Paderewski.

his formal training in Hannover with Karl-Heinz Kämmerling and made his permanent home in Europe. He taught for many years at the Royal College
of Music in London and in 2015 accepted a professorship in the United States, at the Frost School of Music, University of Miami. Apart from his work as a teacher, he has served on juries of some of the most celebrated international piano competitions.

Kenner has performed as soloist with world-class orchestras including the Hallé, BBC Symphony, Deutsches Symphonie-Orchester Berlin, Warsaw Philharmonic, Czech Philharmonic, National Orchestra of Belgium, Orchestra of the 18th Century, NHK Symphony of Japan, San Francisco Symphony, and St. Paul Chamber Orchestra. He has collaborated with conductors such as the late Sir Charles Groves, Andrew Davis, Hans Vonk,
Jirˇí Beˇlohlávek, Jahja Ling, Jacek Kaspszyk, Stanis∏aw Skrowaczewski, Antoni Wit and Jerzy Maksymiuk. He has worked with string quartets such as the Belcea, Tokyo, Endellion, Vogler, Casal and Panocha, and worked as duo partner with cellist Matt Haimovitz, and since 2011 with Kyung Wha Chung. He is a frequent guest at the Pyeong Chang Music Festival in Korea and the ‘Chopin and his Europe’ Festival in Poland. Kevin Kenner’s recordings are distributed internationally and include many discs of Chopin works (among those

a recital on period piano, released in the Real Chopin series by the Fryderyk Chopin Institute) as well as recordings of Ravel, Schumann, Beethoven, Piazzolla and Paderewski, the latter two having won special prizes. His CD Chopin Resonances was singled out by Gramophone magazine as one of the top 50 Chopin discs ever recorded.