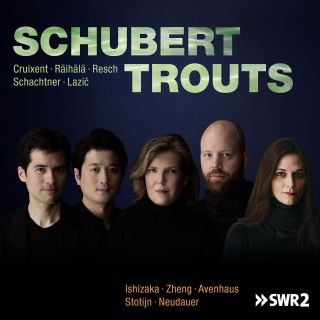 - Next to Schubert’s most popular chamber music work, five young European composer’s were asked to write addendums on Schubert’s music

- Star elite on the instruments who will tour this project within the next year around Europe (Musiktage Mondsee, Mosel - Musikfestival, Musiktage Bad Urach, Beethoven123 Oslo as well as Wigmore Hall London, Sevilla, etc.)

Silke Avenhaus had wanted to record Schubert’s Trout Quintet for a long time. Now five European composers were additionally asked to quasi-casually prolong Schubert’s ambivalences into the present by supplying their own variations. The commission called for works that were to be limited in length, and each composer was asked to focus his attention on a particular instrument. Although all of their pieces are based on the Trout theme, the resulting works vary utterly in terms of character and tempo. As Avenhaus puts it, this is a “godsend”. The new compositions can be grasped as individual movements of a contemporary Trout quintet,but one can also combine them in several different ways.

Is this a “sunny piece”? Cheerful? Carelessly babbling like a brook? It tends to be exclusively associated with positive images, but pianist Silke Avenhaus, the initiator of the “Trout Project”, contrasts all of this with the work’s fundamental ambivalence. In Schubert’s quintet she finds a mixture of lightness and melancholy. The first movement’s insouciance, for instance, is almost casually obliterated in the second one. Schubert does not hold
fast to any mood or attitude for long: ambivalence continues to hold sway, and it is a trait she particularly appreciates.

The double bass and the cello form a strong bass section in this particular piano quintet. The line-up may have been unusual and difficult to score in terms of timbre, but Schubert skillfully made best of the situation by expanding the range of different sonorities to the maximum. The low strings fathom the underground. Conversely, the piano, often playing in octaves for long stretches in the upper range, carries out the assigned role of shining brightly on the mountain peaks. The middle range is tenderly filled out by the other strings. The resulting musical texture seems to float in midair. (from the lines notes by Elgin Heuerding)

SILKE AVENHAUS / Piano
Sensitivity, creativity, profound emotion, a sense of structure, and the joy of discovery: these are the
traits singled out by music critics in praise of pianist Silke Avenhaus for her international concert
appearances and over 30 CD productions in which she has participated. She is regularly invited to
appear at the most important European music festivals including Salzburg, Lucerne, Schleswig-Holstein,
Rheingau, the Ruhr Piano Festival, and the Pablo Casals Festival, as well as the Marlboro Music Festival
(USA). In chamber music she has partnered with an outstanding roster of European colleagues.
Born in Karlsruhe, she studied with professors Bianca Bodalia and Klaus Schilde (Munich), György
Sebök (Indiana), Sandor Végh, and András Schiff. She has been appointed Honorary Professor at the
Hochschule für Musik in Munich, and is engaged in projects including Rhapsody in School, Sounds
and Science (a series of which she is co-founder, held at Vienna Konzerthaus), and Artists for a Better
Future (a circle of artists who support social projects worldwide). www.silke-avenhaus.de

Lena Neudauer started playing the violin when she was three years old. At the age of eleven she
entered the class of Helmut Zehetmair at the Salzburg Mozarteum, and went on to study with
Christoph Poppen and Thomas Zehetmair. When she was fifteen, she scored a spectacular triumph at
the Leopold Mozart Competition in Augsburg, winning not only First Prize, but almost all the Special
Prizes. In 2010, on the Hänssler Classic label, she released her first CD, featuring Schumann, which
received the International Classical Music Award (ICMA). CDs by Mozart concertos, chamber music by
Ravel and Mendelssohn followed. On an international scale, she has appeared in festivals and performed
with conductors of the likes of Dennis Russell Davies, Mariss Jansons, Reinhard Goebel, and Bruno Weil.
In 2010, at the young age of 26, Lena Neudauer was named Professor of Violin at the Saar University
of Music. In 2016 she took up a professorship at the Munich University of Music and Theater.
www.lena-neudauer.de

Violist Wen Xiao Zheng was born in Shanghai and studied with Gérard Caussé (Madrid), with Diemut Poppen
(Detmold) and Hariolf schlichtig (Munich), while attending masterclasses with Yuri Bashmet und Paul
Neubauer. In 2009 he concluded his studies with an additional degree in chamber music. Zheng won First
Prizes at the National Viola Competition in China, at the Ciudad de Xátiva competition (Spain), the Lionel
Tertis Viola Competition (UK), the Llanes Viola Competition (Spain), the Yuri Bashmet Viola Competition
(Moscow) and, in 2008, a 2nd Prize at the renowned ARD International Music Competition in Munich (First
Prize not awarded). In 2009, the Deutsche Stiftung Musikleben awarded him a viola built by P. A. Testore,
and in 2010 one by Haiko Seifert (Plauen). Wen Xiao Zheng has performed as a soloist with major orchestras
and is widely active as a chamber musician. In 2010 Zheng became Principal Violist of the Bamberg
Symphony Orchestra, then in 2014 of the Bavarian Radio Symphony Orchestra in Munich. In 2017
he started teaching at the Munich University of Music and Performing Arts. wxz.no-te.com

After receiving First Prize at both the ARD Competition and the Grand Prix Emanuel Feuermann,
Danjulo Ishizaka is ranked among the most outstanding cellists of his generation. He studied with
Boris Pergamenschikow and Tabea Zimmermann and gave his first recital at the Berlin Philharmonic
Hall at the age of 17, followed by further débuts, including Carnegie Hall (2006). In 2012 he was awarded
Japan’s most outstanding music prize, the Hideo Saito Memorial Fund Award. His CD recordings have
been selected for the coveted German Echo Klassik Prize as well as the Gramophone Award. Danjulo
Ishizaka is a welcome guest at a multitude of renowned festivals; as a soloist, he performs worldwide
with leading orchestras from London, Vienna, Tokyo, Detroit, and with conductors of the likes
of Christoph Eschenbach, Vladimir Jurowski, Michael Sanderling, and Leonard Slatkin. One of the
instruments he plays is the Stradivarius cello “Feuermann” (1730), on loan from the Nippon Music
Foundation. Danjulo is Cello Professor at Basel Music Academy and Berlin University of the Arts.
www.danjulo-ishizaka.com

Rick Stotijn is held in high esteem as one of the leading bass players worldwide. He received his first
lessons at the age of eight and went on to study at the Conservatory in Amsterdam with his father Peter
Stotijn, where he graduated with the highest distinction. He subsequently studied with Božo Paradžik
at the Hochschule in Freiburg. Rick has won several First Prizes: at the Princess Christina Competition,
at the Dutch Young Musical Talent Foundation, and in 2013, the highest accolade awarded to a musician
in the Netherlands: the Dutch Music Prize. Many solo appearances at home and abroad were soon to
follow. Rick Stotijn performs regularly as soloist with orchestras from Sweden, Amsterdam, Rotterdam,
The Hague and others. Next to new music he enjoys chamber music working with Janine Jansen,
Christianne Stotijn, Liza Ferschtman, Robert Holl, Mischa Maisky, Julius Drake, Vilde Frang, Amihai Grosz,
Julian Rachlin, and many others. Two CDs were released in 2012 and 2014. He plays a Raffaele & Antonio
Gagliano double bass, on loan from the Dutch National Musical Instrument Foundation.
www.rickstotijn.com