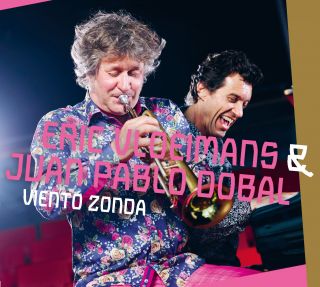 Viento Zonda - Eric Vloeimans' new adventure that exudes the warmth of the Argentine breeze along the Andes. The gentle, even tickling sensation surprises as Eric and his musical brother, the virtuoso pianist Juan Pablo Dobal takes the listener to new aural delight.

Eric Vloeimans has been active in a wide variety of ensembles all over the years.  He has toured the US twice with his acoustic ‘chamber/jazz’ 'Fugimundi' trio, featuring the surprising Anton Goudsmit on guitar and rising star Harmen Fraanje on piano. Their broad repertoire ranges from contemporary jazz, hymns, world music to occasional standards, all of which is presented with warmth and wit. His other band is Eric Vloeimans' Gatecrash, which features soundscape master Jeroen van Vliet on Fender Rhodes and keyboards, the inventive Gulli Gudmundsson on bass, electric basses and effects, and the up and coming Jasper van Hulten on drums. Vloeimans expands his trumpet mastery with electronics special effects. Gatecrash has earned a reputation as one of Europe's top cross-over bands between jazz and pop. The music ranges from lazy lounge music to hard core uptempo beats and spaced out moods, with Zappa-influenced odd meters. It's a band that sweeps the audience away.  Gatecrash has toured throughout Europe, Asia and the USA.

Vloeimans' performances and recordings with a multitude of other formations has shown his versatility. His musical talent, easy-going attitude and great sense of humour have brought him to play with national and international artists such as Mercer Ellington, John Taylor, Peter Erskine, The Rotterdam Philharmonic Orchestra, Jasper van 't Hof, Wayne Horvitz, Charlie Mariano, Nguyên Lê, Jimmy Haslip, Philippe Catherine, Joey Baron, the Holland Baroque Society, Lars Danielsson, Michael Moore, Tuur Florizoone, the Matangi Quartet, Bojan Z., Eric Vaarzon Morel, Martin Fondse, soundartist Michel Banabila, the Royal Concertgebouw Orchestra and many, many others.
His most recent cd is with German pianist Florian Weber, an astonishing performance “Live at the Concertgebouw” recorded in April 2011.  That year saw Eric do seven concerts in that venerable institution – four concerts in  the recital hall and three in the large hall, all of which were on a carte blanche basis.  He performed with the Metropole Orchestra, the Marinierskapel (the Navy Band),  the Paradiso Ochestra – his other forays into the classical world include a world premiere of a new trumpet concerto “Evensong” (written by Eric and Martin Fondse) which he performed with the Limburg Symphony Orchestra on October 26th and 30th 2011.

Eric has also ventured into film music, writing (with Fons Merkies) and performing the music for the feature film “Majesteit” (premiered in September 2010), as well as for the animation film “Audition” (with Martin Fondse).
His musical collaborations have taken Eric Vloeimans abroad many times. With diverse artists and ensembles he played all over Europe, Indonesia, China, the Middle East, South Africa and Japan. Experiences from his travels influence his music constantly and can be heard in many of his compositions.
Recently he was asked to perform a solo trumpet intermezzo at the reknowned “TED-x” conference in Amsterdam that left the audience quite speechless.
He has been honored because of his many works, in all possible genres that cover the range from classical to pop, film music, world and jazz. In between playing all over the world, being on tour and picking up Edison Awards, he shares his talent with the students of the Codarts College for the Arts in Rotterdam, and the Royal Conservatory in the Hague.
Eric Vloeimans plays from the heart and has shown a remarkable power to create bridges and reach the hearts of audiences all over the world.