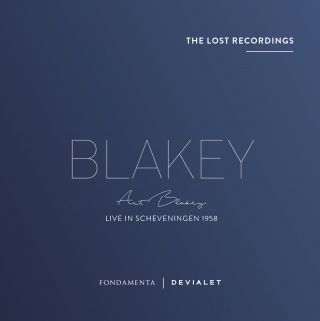 Catalog number: FON 1804034
Releasedate: 09-11-18
- Recorded live at the Kurhaus in Scheveningen, Holland on the evening of November 29, 1958
- Stunning live performance brought to live on this double album

It was the evening of 29 November 1958. On the stage of the Kurhaus in Scheveningen, Art Blakey grabbed the microphone to say, “I would like to take a moment and say good evening on behalf of the Jazz Messengers and myself.” Everyone present could feel that this was a concert that would go down in history.

Art Blakey had just turned thirty-nine. He was “Bu” to those who knew that late in the 1940s he had taken the name of Abdullah Ibn Buhaina. In 1954, he had co-founded the Jazz Messengers with pianist Horace Silver, but now he led the quintet single-handedly, identifying the most outstanding talents, mentoring them, taking them to the top. The group of course continued to expand until late in the 1980s to include other artists – as talented as they were diverse – such as Wayne Shorter, Clifford Brown, the Marsalis brothers and Keith Jarrett. But already in 1958, the ensemble was inspired, imbued with confidence, crowned with success, and most importantly, original. Pianist Bobby Timmons had just composed the emblematic “Moanin’” and saxophonist Benny Golson, his famous “Along Came Betty”, songs that the Jazz Messengers interspersed with the compositions of their illustrious fellow musicians: Thelonious Monk, Charlie Parker and Dizzy Gillespie. The crème de la crème of the jazz world was on stage that evening, their performance fallen into oblivion until this recording.

Art began the evening by presenting his line-up. Kind words: for each one, a little hyperbole, a tad too much praise – enough to create a light-hearted, intimate atmosphere. Then, over the evening, he introduced each piece, each time jokingly promoting the Blue Note label and eliciting chuckles among the audience. While the band played, Art never stole the limelight, however inventive the pulsating rhythms of his sticks, emerging whenever he felt his magic should work its spell. His legendary multiple bounce rolls following on the heels of the piano and saxophone solos brought them depth and colour, extending their horizons, strengthening them, making them ever more limpid.

Pianist Bobby Timmons’ “rusty fingertips” got the concert going with “Moanin’”, while the rest of the band simply underlined the rhythm before developing it. The tone was set: thoughtful yet jubilant, simple, subtly nuanced. This was followed by “Along Came Betty”, for the Betty who took Benny Golson’s fancy when she walked into a club where he was performing. After a tribute to Thelonious Monk lasting several minutes, the Jazz Messengers launched into an exploration of a magnificent ballade composed by Benny Golson in memory of Clifford Brown, the great trumpet player who had passed away two years earlier. In “Now Is The Time”, Art paid a modest tribute to the man he called the prophet of modern jazz, Charlie Parker. The next piece, “Whisper Not”, is one of muted melancholy, elegance and emotion, tenderly expressed by Lee Morgan’s trumpet. At this stage, it must have been hard to imagine that the concert would end so resoundingly. Art, communing with Africa as expressed by Gillespie, launches into a long solo with varied successions of rhythms, and all the colours of the continent surged forth until, at the very end, all the instruments exploded in a display of fireworks, each bursting out as the others faded away. With the last note, Art stood up and made his way to the edge of the stage. We can imagine his teasing smile as he took in the applause, finishing with, “May God bless you.”

Over thirty years later, when Art Blakey died, The New York Times quoted Max Roach: “Art was an original. He’s the only drummer whose time I recognize immediately. And his signature style was amazing; we used to call him ‘Thunder’”. The storm had already thundered over the stage of the Kurhaus that night in 1958.

In the '60s, when John Coltrane and Ornette Coleman were defining the concept of a jazz avant-garde, few knowledgeable observers would have guessed that in another 30 years the music's mainstream would virtually bypass their innovations, in favor of the hard bop style that free jazz had apparently supplanted. As it turned out, many listeners who had come to love jazz as a sophisticated manifestation of popular music were unable to accept the extreme esotericism of the avant-garde; their tastes were rooted in the core elements of "swing" and "blues," characteristics found in abundance in the music of the Jazz Messengers, the quintessential hard bop ensemble led by drummer Art Blakey. In the '60s, '70s, and '80s, when artists on the cutting edge were attempting to transform the music, Blakey continued to play in more or less the same bag he had since the '40s, when his cohorts included the likes of Charlie Parker, Miles Davis, and Fats Navarro. By the '80s, the evolving mainstream consensus had reached a point of overwhelming approval in regard to hard bop: this is what jazz is, and Art Blakey -- as its longest-lived and most eloquent exponent -- was its master.

The Jazz Messengers had always been an incubator for young talent. A list of the band's alumni is a who's who of straight-ahead jazz from the '50s on -- Lee Morgan, Wayne Shorter, Freddie Hubbard, Johnny Griffin, Jackie McLean, Donald Byrd, Bobby Timmons, Cedar Walton, Benny Golson, Joanne Brackeen, Billy Harper, Valery Ponomarev, Bill Pierce, Branford Marsalis, James Williams, Keith Jarrett, and Chuck Mangione, to name several of the most well-known. In the '80s, precocious graduates of Blakey's School for Swing would continue to number among jazz's movers and shakers, foremost among them being trumpeter Wynton Marsalis. Marsalis became the most visible symbol of the '80s jazz mainstream; through him, Blakey's conservative ideals came to dominate the public's perception of the music. At the time of his death in 1990, the Messenger aesthetic dominated jazz, and Blakey himself had arguably become the most influential jazz musician of the past 20 years.