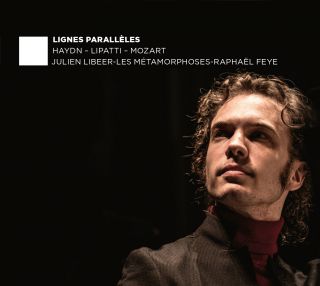 
On his second release for Evil Penguin, Belgian piano prodigy Julien Libeer teams up with the new ensemble Les Métamorphoses to contrast authentic and neo guises of 18th century music. The true classicists are featured on this disc with unusually restrained work: Haydn’s Passion Symphony no. 49 is broodingly solemn, Mozart’s last piano concerto no. 27 deceptively intimate.
These repertoire icons are coupled to Dino Lipatti’s crystalline Concertino in the Classical Style (1936), which sheds neo-classical light on the vintage idiom. When Lipatti (1917-1950) died at the age of 33, he was already a piano legend: Poulenc found “divine spirituality” in his playing, and Enescu believed his godchild was “born with a star above his head”. The Concertino is audibly indebted to Bach and Scarlatti, but there are dashes of Stravinsky, as well as a foretaste of Bela Bartók’s language.

Libeer’s fusion of older and newer worlds is not limited to the programme of this record. Although Les Métamorphoses typically play on modern instruments (albeit with the greatest possible respect for the respective sonorities of different eras), they engaged natural horns and wooden transverse flutes for period colour and crisp.

The solo piano also represents the best of both worlds: the Concert grand with parallel strings (which Chris Maene originally built for Daniel Barenboim) combines pianoforte possibilities – clearly distinguishable voices and colour across registers – with the technical advantages and playing comfort of a modern Steinway. The result, says Julien Libeer, is an instrument “which speaks as beautifully as it sings”.

For Libeer, this new recording represents the next stage in a brilliant, but unusual career. Although the pianist consciously steers clear of the competition circuit, he obtained an impressive range of awards (including Young Musician of the Year 2010 from the Belgian national broadcaster Klara). His first solo record Lignes Claires featured work by Ravel and Lipatti and was highly acclaimed in the press (5 Diapasons). His second album (with Lorenzo Gatto, in violin sonatas by Beethoven) received the Diapason d’Or of the year 2016.
The present recording is Julien Libeer’s first orchestral release. It was recorded in the generous acoustics of the Concertgebouw Brugge.

Lignes Parallèles trailer
“The complete musician, who unites, at any musical moment, a true understanding of the piece, a solid intellectual approach and an infallible instinct for the impalpable.” - Maria João Pires

Born in 1987 near Brussels, Belgium, Julien Libeer’s earliest musical memory was the famous documentary on the recording of West Side Story by Leonard Bernstein. The piano, which he took up at age six, quickly became the faithful companion for expressing a love of music that, until today, thrives as much on opera, orchestra and chamber music as on the piano repertoire.

For five decisive years, French-Polish pedagogue Jean Fassina was the patient, demanding, wise teacher that any aspiring musician should have the chance to encounter. This experience was followed by the equally intense collaboration with Maria João Pires at the Queen Elisabeth Music Chapel, whose advice and support strongly infl uenced Julien Libeer’s views over the last years, and continue to do so.

Julien Libeer has been a regular guest of Flagey and the Palais des Beaux- Arts in Brussels, the Théâtre de la Ville (Paris), the Juventus Festival and the Abu Dhabi Music Festival. A member of Maria Joao Pires’ Partitura project, he has recently made his debut in such venues as the London Barbican Hall, the Auditorio Nacional in Madrid, Barcelona’s Palau de la Musica and the Amsterdam Concertgebouw. Upcoming invitations include a Japan tour and performances at the Miami International Piano Festival, among others. An accomplished chamber musician, he performs with Lorenzo Gatto, Camille Thomas, Augustin Dumay, Maria João Pires, Frank Braley, to name just a few.

Julien Libeer has studied piano with Daniel Blumenthal (Royal Conservatory of Brussels), Jean Fassina (Paris), and is an associate artist of the Queen Elisabeth Music Chapel, where he also specialized in chamber music with the members of the Artemis Quartet. Furthermore, he has received the advice of Dmitry Bashkirov, Alfred Brendel, Abdel Rahman El Bacha and Gerhard Schulz (Alban Berg Quartet).

He has received the Juventus prize (most promising young European soloist) in 2008, and was elected Young Musician of the Year by the Belgian Music Press Association in 2010. The Klara award 2013 was attributed to him by the audience of the national radio for classical music.

Much appreciated for his eloquence, Julien Libeer is a regular guest of media at home and abroad. His work has been subject of a TV documentary (“Technique doesn’t exist”, 2013), also available on YouTube.

Based in Brussels, he spends most of his free time reading, swimming or enjoying a good series, and is actively engaged in a number of social projects, all rooted in the idea that music, far beyond its esthetic value, can be a force of change for anyone ready to listen.