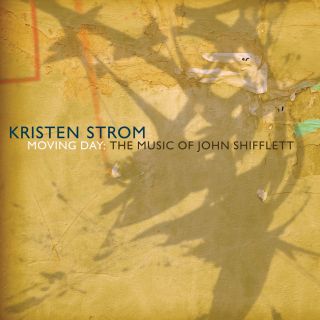 Catalog number: OA2 22161
Releasedate: 08-02-19
- “With a tone that's lithe and lustrous, Kristen Strom embodies her musical philosophy in every note she plays.”  - Andy Gilbert, San Jose Mercury News
- All music by John Shifflett
John Shifflett (1955 - 2017) was a beloved bassist, well-known as THE sideman in many of the San Francisco Bay Area’s foremost ensembles and for traveling jazz dignitaries. Kept more as a guarded secret was his compositional skills and library of compelling and varied pieces of music. Saxophonist Kristen Strom, guitarist Scott Sorkin and drummer Jason Lewis played with John in their quartet and on countless other projects over the last 25 years. For this deeply heartfelt tribute to their friend, Kristen, Scott and Jason have arranged a collection of his compositions and brought together some of his esteemed Bay Area colleagues to perform, record, and celebrate his music. Without a doubt, a labor of love, and a testament to a life well lived in service to music, the creative process, and friends.
In addition to leading her own ensemble, the Kristen Strom Quintet, she is an integral part of some of the San Francisco Bay Area's leading bands. She has performed with many well-known artists, including Manhattan Transfer, Roberta Flack, Johnny Mathis, Jimmy Heath, Steve Turre, Kevin Mahogany, Michel LeGrand, the San Jose Symphony, the Temptations, Natalie Cole, The Four Tops, and the San Francisco Production Beach Blanket Babylon. In addition to her solo albums, "Intention", and "Sojourn"she has recorded more than 30 CDs with various jazz and pop artists, including the international jazz group Crossing Borders, John Worley and Worlview, Ed Johnson and Novo Tempo, Wally Schnalle, Tammy L. Hall, The Jim Norton Collective and poet Paul Zarzyski and four albums with The Nuclear Whales Saxophone Orchestra. Her touring schedule has included performances across the U.S., Canada, Europe and Asia with the Nuclear Whales and others.

Kristen is saxophone and jazz combo instructor at Santa Clara University, is on the faculty of the Stanford Jazz Workshop and is the Director of South Bay Summer Jazz Intensive.

Kristen has a B.A. in Music from San Jose State University, as well as graduate studies in music education, and studied saxophone and woodwinds with Joe Henderson, Mel Martin and Victor Morosco.

Kristen is an endorsing artist and clinician for Selmer saxophones.