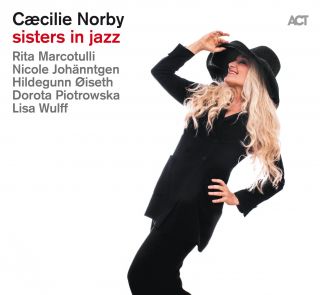 Catalog number: ACT 97382
Releasedate: 25-01-19
- These ladies represent some of the most exciting, diverse and dynamic players on the European jazz scene

Throughout my career as a recording artist, I have had the great fortune of playing with some of the best musicians on the scene - enabling me to continuously explore new musical paths and means of expression. For whatever reason the vast majority of these artists that I have performed with have been men.

On this album we gather musical forces celebrating women in jazz. My European sisters and I come from six different countries, and our groups’ age range spand over 30 years. These backgrounds all merged and resulted in an album that is diverse, dynamic and flavored with a mature empathy to the compositions.

In their skilled company, I have been given a wonderful platform on which I am able to convey the selected 12 tunes with the desired depth, humor and integrity that I fiercely believe that they deserve. In addition to two of my own compositions we have recorded 10 beautiful songs written by significant female composers, who have greatly influenced my musical growth.

There is no doubt that strong, competent female musicians are underrepresented on the music scene! Nor is there any doubt that they exist! Hence, when producer Siggi Loch presented me with the “sisters in jazz” idea, I was delighted and welcomed the opportunity to celebrate woman in music.

These ladies represent some of the most exciting, diverse and dynamic players on the European jazz scene. We had magic from the very first moment we met in Village recording studio in Copenhagen, some very hot days in June. The heat brought forth a playfulness amongst us. The music came first, egos were put aside and that special magic and bond that arises when good music comes to life, came into play here.

The daughter of two classical musicians – her mother was an opera singer, her father a composer – Caecilie Norby has always been a traveller between different worlds of music – jazz, blues, soul, pop, rock and classical – Norby can do it all, and that always in an absolutely distinctive way. She was the first female Danish artist to garner a recording deal with the legendary Blue Note label, and she has worked with many international stars from the widest range of fields. Perhaps the most important of these is the bass player Lars Danielsson, who not only became her husband, but also the producer and partner on almost all of her projects. With almost half a million albums sold, Caecilie Norby is one of the most successful female jazz musicians in Europe and one of the key figures representing the bridge between pop and jazz.